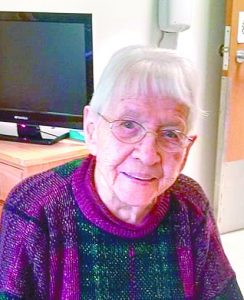 Margaret Sandberg, 101, of Kennedy, Minn., passed away at Kittson Memorial Healthcare Center in Hallock on Saturday, May 11, 2019.
Margaret Ingrid Sandberg was born in Tegner Township on Jan. 9, 1918, to Victor and Emma (Anderson) Sandberg. She grew up on the family farm east of Kennedy with her twin sister, Marie, and younger sister, Ebba. Margaret attended school in Kennedy and graduated from there in 1939.
She continued her education at Moorhead State Teacher’s College for two years and then attended the University of Minnesota, graduating with her four-year degree. Margaret taught school in Holt, Nashwauk, Moorhead and Hibbing, Minn., and also spent a year teaching in Frankfurt, Germany. She retired after 42 years of teaching.
Margaret was a member of Maria Lutheran Church and often played organ for church services. She enjoyed an active life and loved spending time with her sisters, niece and nephews. Margaret has been a resident of Kittson Mem-orial Healthcare Center since 2008.
Family members include her sisters, Marie Erlandson and Ebba Sandberg both of Hallock; a niece Sandy Parent, Kennedy; nephews, Eddie Erlandson, Spring Creek, Nev., and Randy Erlandson, Dickinson, N.D., and two grand nephews.
She was preceded in death by her parents and two infant brothers.
Funeral services were held Wednesday, May 15, 2019, at 1 p.m. in Maria Lutheran Church at Kennedy. Interment was in West Emmaus Cemetery, rural Kennedy. Visitation was held at the church for one hour prior to the service. Pastor Kathy Levenhagen, presided; Corienne Jacobson, soloist and Sharlene Klegstad, organist.
Austin Funeral Chapel, Hallock, was in charge of the arrangements.