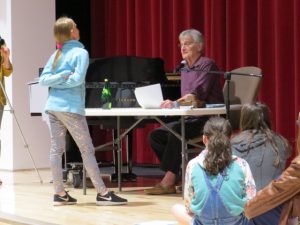 KAMELA HANSON speaks with talent scout PETER SKLAR, is interviewed by Sklar. The New York talent scout interviewed 13 students at Kittson Central after his lecture on Wednesday, May 15. He invited seven of them to attend The Beginnings Workshop in New York this August.

By Anna Jauhola
By complete accident, a famed talent scout, educator and lecturer from the East Coast decided to give a talk at Kittson Central. Peter Sklar spoke to students and parents on the evening of Wednesday, May 15.
He had another talk in Minnesota and decided to search for other schools in the area he might want to visit and landed on Kittson Central. The presentation was totally free.
Much of his advice, though geared toward success in entertainment, is universal.
“Real is everything,” he said. “If you don’t like you, you’re going to have problems out there – socially, at work, interviewing and forget about being a performer.”
Sklar, with dry and sarcastic humor, spoke frankly to a group of about 20 students and some parents. He often showed how interviewers might pick on them if they audition for a role.
Sklar asked sixth grader Izzy Pedraza about her hat and why she wore it. When she finally said she just liked it, Sklar accepted her answer.
“I was not interested in your hat. I was interested in how you reacted when I was picking on you,” he said.
Sklar then demonstrated the way he and other professionals are able to read those they interview. He said Pedraza is strict with herself and is “very unsatisfied if she doesn’t look a certain way.” Pedraza and her fellow students seemed to agree with his assessment.
He emphasized that kids are too often told to feel good about themselves. However, he said feelings are hard to get out of your head. It’s a great goal, he added, but bad advice.
“Practice being aware about you,” he said. “It’ll make you less likely to be fake.”
Whether preparing for an interview for a role or for that first job, Sklar said fears are normal, but do not base your feelings on your fears. Many, if not all, interviewers intuit nonverbal communication, so body language is important.
“They’re almost psychic in reading you,” he said. “It’s not a parlor trick. It’s simply what you look like – your expression, what you’re wearing, your hair, and so on. There’s a little flood of information, as soon as they ask a question, in how you act.”
This is where his advice and certain classes can come in handy. As with any talent, acting and interviewing included, practice and training are a must. Sklar announced that from the students in attendance, he would interview and select a few to attend The Beginnings Workshop in New York City.
After his talk, Sklar asked the parents to leave the room and he interviewed each student who chose to stay for an interview. Some interviews took longer than others while he probed with deeper questions or students did their best not to answer with, “I don’t know,” but instead give genuine responses.
Sklar chose seven students from the group of 13 who interviewed. He encouraged everyone to support one another, whether they were chosen or not.
“If I was looking for kids strictly interested in performing, I would usually pick a third of those,” he said. “What’s interesting is these kids were interested in everything but (performing.) There was some peripheral interest. But that opened it up for a more interesting kid and asking how would the arts help the kid?”
Sklar said the students with whom he spoke at Kittson Central were more innocent than he expected and more genuine. He thought there would be a stronger interest in the arts and it surprised him that the students had so many other interests.
“One girl was sensitive and shy, but good and smart and caring. I thought, ‘Wouldn’t it be cool to get this kid into acting classes?’ So I picked her,” Sklar said. “She didn’t say one word about wanting to be an actress, so that sort of opened it up for me.”
Those students to whom he gave the opportunity have the next week to decide whether they would like to attend the weeklong workshop, which costs $1,690 for housing, meals and training. The cost of travel is extra.
Sklar said, after the event, that he did not expect to invite so many kids to attend the workshop.