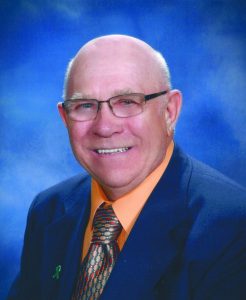 Rudolph “Rudy” Dembiczak, 79, of Karlstad, Minn., passed away at his home on Tuesday, May 14, 2019.
Rudolph Alex Dembiczak was born March 18, 1940, in Greenbush, Minn., to Alex and Agnes (Bizek) Dembiczak.  He grew up near Greenbush and graduated from high school there in 1958. He worked for Boeing Aircraft in Seattle for one year and returned to Minnesota.
On June 26, 1971, he was united in marriage to Tania Johnson at Greenbush.  The couple settled in Halma, Minn., and raised their family there.
Rudy was a jack of all trades and worked in many jobs, including American Crystal Sugar Company in Drayton and lastly for Marvin Windows in Warroad, retiring from there.
In retirement Rudy filled his time with gardening, canning and woodworking. Rudy  played in a band in his younger years and liked to polka. He also enjoyed watching the Minnesota Twins, playing pool and dominoes. Rudy was a member of St. Edward’s Catholic Church in Karlstad.
He is survived by a daughter, Dawn (Dan) Stull, Hallock; sons, Kirby (Kari) Dembiczak, Halma and Cory  Dembiczak, Emerado, N.D.; eight grandchildren, Walker, Mykael, and Summer Dembiczak, Stefanie and Rylie Stull, Evan and Breydan Dembiczak, and Dylan Meader; a sister, Shirley (Morris) Goos, Roseau, Minn., and nieces and nephews.  He was preceded in death by his parents; wife, Tania; and a sister, Loretta Hendrickson.
Funeral services were held on Monday, May 20, 2019, at 2 p.m. in St. Edward’s Catholic Church, Karlstad.  Interment was in Eidsvold Cemetery, Halma.  Fr. George Noel, presiding; Mykael Dembiczak soloist.  Casket bearers were Rudy’s  grandchildren.  Visitation was held at the church on Sunday evening from 6 to 8 p.m. with a prayer service at 7 p.m.  Shane Olson provided special music.
Austin Funeral Chapel, Hallock, was in charge of the arrangements.