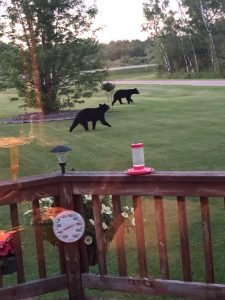 BEARS HAVE BEEN SEEN ABOUT THE COUNTY in recent weeks. This picture was captured in the yard of TODD AND BONI FOSSELL, who live along Highway 11 outside Karlstad.

By Anna Jauhola
Black bears are roaming Kittson County. Although this isn’t unusual, some animals have been taking people by surprise.
A large black bear wandered into the yard at John and Cheryl Muir’s home southeast of Hallock at the end of the Fourth of July weekend.
Cheryl said she and two of her grandchildren had been picnicking in the yard and 10 minutes after they went inside, the bear appeared in the area. They watched the animal for a little while and when it left, Cheryl and John removed bird feeders from the yard to help ensure the bear would move on.
There have been reports of bears throughout the county, and local officials with the Minnesota Department of Natural Resources say it’s up to people to be proactive to prevent bear encounters.
Ruth Anne Franke, area supervisor for the Karlstad Wildlife Management Area, said bears are actively foraging, which is not limited to greens and berries.
“You should take all typical precautions to discourage bear from your yard. They’re going to pass through different areas,” Franke said. “Just don’t give them a reason to want to stick around in your yard.”
Franke said setting garbage out the morning of collection or in a bear-proof container helps. Keeping animals indoors and removing bird feeders, barbecue grills and smelly garbage from your yard is helpful.
“If you can’t bring yourself to bring them in, then just bring them in at night,” she said of bird feeders. “Same with pet food, barbecue grills, and so on. It is an inconvenience, but it will minimize your chances of having a bear encounter.”
While Franke has only heard of one incident so far this season, Lake Bronson State Park Manager Jenny Eastvold said she has had reports of bears throughout the park, including near campgrounds. Eastvold said last week she had not seen any herself, but heard from campers that a sow with three cubs were on the road leading to the Two Rivers Campground. She also had a report of a sow with two cubs near the dam.
“When that happens, then we post signs in the park and campgrounds warning that bears are in the area,” Eastvold said. “And we have personal contact with each camper. We don’t want bears getting used to eating human food.”
Eastvold said bears usually mind their own business and park employees believe visitor education is key in keeping it that way.
When speaking to campers, Eastvold and her crew impress upon them the importance of keeping food secured in a vehicle overnight and that coolers are not bear proof.
“If bears come into the campground, they should have no reason to hang out because there should be no food if campers are dutiful and keep their food in vehicles,” Eastvold said.
Although Lake Bronson State Park hasn’t had any nuisance bears, Eastvold said should bears become problematic, campers should make noise to scare bears and discourage them from being there.
“Once they get a reliable food source, then they’ll vanish back into the woods,” Eastvold said. “But it’s an in-between time right now, so they’re moving around looking for