By Anna Jauhola
Harold Anderson’s signature sense of humor has been a trademark customers have come to rely on when visiting Anderson Pharmacy and Country Collectibles in Hallock.
As of late June, Anderson announced his retirement as a pharmacist after serving Hallock and surrounding communities for 54 years. He and his wife, Jeanne, sold the pharmacy to Kittson Healthcare.
“In my mind, basically the hardest part is just not being able to serve the community in the way I have been with my license,” Anderson said last week. “Getting to know the people and the relationships with our customers have been the best part. Jeanne and I provided not only prescription coverage for them, but gifts and things they need or want to purchase. We’ve been trying to fulfill the needs of people.”
Anderson started his career as a pharmacist 1961 after he graduated from North Dakota State University’s School of Pharmacy. He spent his first four years at Wahpeton Rexall Drug in Wahpeton, N.D., for Bill Groz and B.C. Thompson. When asked the quick question of, “How did you get to Hallock?” Anderson replied, “I drove.”
With a rephrased question of, “What drew you from Wahpeton to Hallock?” he laughed.
“There was a drug salesman by the name of Leo Flake that told me there was an opening in Hallock,” Anderson said. “I drove up and bought in to Clay Drug.”
So, he and Jeanne drove to the opposite end of the Red River Valley and partnered with Andrew and Ruggles Clay. When Andrew Clay retired, Anderson bought his 49 percent of the store. When Ruggles Clay retired, the Andersons purchased the remaining 51 percent.
In the early ’70s, the Andersons purchased the current Anderson Pharmacy building and implemented the County Collectibles.
“After we bought the store, we decided to stay,” he said. “We liked the town. It was prosperous and (the drug store) had all the makings of being a successful business.”
Through the last six decades, Anderson has witnessed many changes in the business. He came in at the tail end of small pharmacies mixing and preparing their own prescription drugs (compounding) and adapted when the computer age caught up with pharmacy. Pharmacists can still do their own compounding, but need a special separate license for it and a sterile environment.
The biggest changes in pharmacy have come through insurance companies and chain stores, he said. As he sees it, Anderson said the way big insurance companies handle reimbursement to small pharmacists has been a detriment.
“And it’s getting worse all the time,” he said.
Mail order, chain stores and insurance reimbursement rates have been difficult obstacles that have really impacted small pharmacies. Despite these issues, Anderson worked through continuing education and learning new systems for the benefit of his customers, providing a vital service for the community.
As retirement looms, Anderson said the last day customers can fill prescriptions at Anderson Pharmacy will be Friday, Aug. 2. Starting Monday, Aug. 5, all customer’s files will be transferred to Kittson Pharmacy, which will be located inside the Kittson Healthcare Clinic in Hallock.
“It is our sincere hope that you would continue to support the new pharmacy,” Anderson said. “We welcome Mr. Solomon Baa into our community as we were welcome when we came.”
As for the Country Collectibles portion of the Andersons’ business, he said he and Jeanne have toyed with the idea of keeping that portion open even after Aug. 2. They are currently working to reduce inventory. Anderson said he has been so thankful to his wife, Jeanne, for being so helpful and accommodating over the years and for her partnership. The couple, in turn, is grateful to the community and area.
“We are so fortunate in Hallock to have a high-quality medical facility and practitioners. This has certainly helped to keep our business going,” Anderson said. “And the people from Hallock and surrounding areas have been loyal to us. We cannot thank the community enough for the loyal support to our store. Without it, we could not have kept going.” 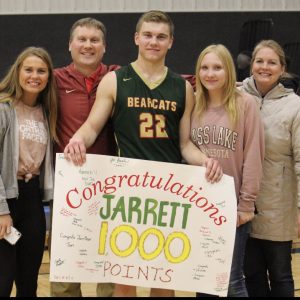