By Anna Jauhola
Kristi Nigg is excited to discover what makes students at Kittson Central tick. She started in her position as school counselor this year and dove right in to evaluating the needs of students kindergarten through 12th grade.
“I have a passion for development and development stages; learning what makes kids motivated,” she said. “So it was an interest of mine to also learn about what can really impact learning in the classroom and struggles that come into place.”
Nigg and her family moved to Hallock about three years ago when her husband took a farming job with his uncle. Nigg chose to stay at home with her children and get to know the community, always with the hope that a counseling job would open up at the school. She holds a master’s degree in counseling and student affairs from Minnesota State University Moorhead.
They moved to Kittson County from the Fargo-Moorhead area where Nigg was a counselor at West Fargo High School. She spent her first three years as an elementary counselor in Colorado.
“Now, doing K-12 in a smaller district, I have a bit of a learning curve,” she said. “But it’s exciting to work with all age groups and see them move from grade to grade.”
Nigg will be there two days a week during this school year, as that’s what the district has budgeted for her position. So far, she has been visiting all classrooms in the elementary school to meet the students. As she settles into her role, she will design a program to connect with students and hopefully see results.
“I work with any students who might be struggling,” she said. “I hope I can find a safe place for them where they know how to find me and know who I am. I just want to be really visible. I’m not going to just be in my office waiting for students to come. I’m going to be out meeting students in the lunchroom, in the hallways making conversation. If something does come up, I hope they’re more comfortable coming to me because I’m more approachable.”
Nigg emphasized she does not only see students who are in trouble. She works with students on study skills, organizational strategies, managing stress at school and home, and developing coping strategies. She hopes to lead groups of students who will be ambassadors to the student body to build and promote a positive culture.
“I see students for so many more reasons aside from heavier emotional issues,” she said.
Helping students navigate challenges in and out of school by developing coping and problem-solving skills is an important part of Nigg’s job.
“It’s incredibly rewarding to watch a student grow socially and emotionally throughout a school year,” she said. “I truly value education and I believe in order for a student to prosper academically, they must also be happy and healthy.”

New Business Manager
Amanda Younggren is Kittson Central’s new business manager. She came on during the 2018-19 school year to begin training with former Business Manager Denise Blomquist. This year, she’s on her own and doing well.
She grew up in Park Rapids, Minn., and attended North Dakota State University, graduating with a degree in accounting. She moved to Hallock in 2013 with her husband, Corey, and worked from home for a Fargo-based company. In 2017, she accepted the city/clerk treasurer position for the city of Stephen. When the business manager position at Kittson Central came open, Younggren applied.
“After having our son and returning to work, I realized how difficult the commute was with daycare hours and busy farm seasons,” Younggren said. “The opportunity to continue doing something I enjoy while staying in town was huge. I also had a few persuasive friends and family that encouraged me to make the change.”
Thus far, Younggren enjoys her job because it is never boring and she’s doing something new every day. She sees a seamless transition as her biggest challenge.
“I have pretty big shoes to fill by replacing Denise,” she said.
She’s happy to have a job she enjoys while also being present for all her child’s little moments.
“As part of the support staff, I hope to make it easier for those that work directly with students to do their jobs,” she said. “It’s so nice to be working in our caring community and I hope to be a great representative for Kittson Central.” 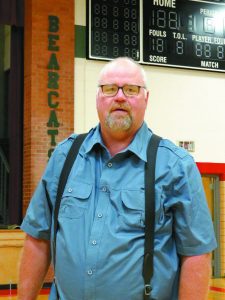 New KC Custodian
Owen Swenson also came to Kittson Central during the 2018-19 year after long-time custodian Robert Klegstad took retirement. Swenson, who was head custodian at Pembina’s North Border School since 2005, is a North Dakota native having grown up in Sheyenne. He attended NDSU for two years and then returned home to work at Equity Co-op Elevator for 13 years.
“In 1996, my wife, Janet, and I moved to Hallock where I helped Noel Peterson farm and Janet started teaching at Pembina,” Swenson said. “We moved back to Hallock in 2013 after Janet accepted a teaching position at Kittson Central.”
Swenson said the job has been an easy transition because he knew many of the staff and students already. As head custodian at Kittson Central, he’s looking forward to getting to know all the students and ensuring a safe, clean environment for them.
“I also have very good custodians showing me the ins and outs of Kittson Central that make my job a lot easier,” he said.
He hopes that by keeping the school in pristine condition his and his colleagues’ work will make students want to keep the facility picked up and clean as well.
“I hope I do my job well enough that it might make Kittson Central a place the kids can feel proud of,” he said. “I never want anyone from the outside area to come here and leave with a negative experience.”