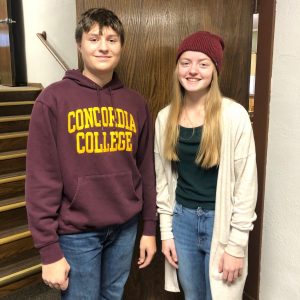 Tucker Nelson and Josie Steen have been selected as the AAA program recipients for Lancaster High School. Established in 1988, the Academics, Arts, and Athletics Award (Triple “A” Award) is sponsored by the Minnesota State High School League. The award goes to high school seniors who have a cumulative GPA of 3.0 or higher, who participate in League-sponsored athletic and fine arts activities, and who comply with the MSHSL’s Student Code of Conduct.
The purpose of the program is to recognize and honor high school seniors who have excelled in the classroom, in the fine arts programs, and on the playing fields or courts. It is also to elevate academic standards and create a greater awareness of the value of league sponsored activities.
Finally, it is to provide schools the opportunity to participate in a statewide program to recognize outstanding students.
Nelson is the son of Ryan and Sandie Nelson. Throughout high school, Nelson has been a top student.
He is a leader in the classroom. He is a member of the National Honor Society, the newly formed Chess Club, the Yearbook Committee and the Knowledge Bowl Team.
In his younger years, he participated in FCCLA, Pep Band, Robotics and Lego League. He is a strong member of our basketball team. Nelson plans to attend college after high school, but he is undecided as to where.
Steen is the daughter of Michael and Kristi Steen. Josie is also a top student in her class. She is the head programmer of the Robotics Team and prior to her entry on the Robotics team, she was the head programmer for the Lego League.
She has been on Student Council since seventh grade and is the current president. She is also the National Honor Society president. She sings in the school choir. She was in the one-act play until it was canceled at Lancaster, and she still participates in the three-act play.
Steen participates in FCCLA, and she earned a national trip her ninth grade year. She is on the Yearbook Committee. Steen is an active participant in our volleyball and basketball program, and she takes stats for baseball. Steen plans to attend St. Louis University or Maryville University in St. Louis or Bethel University in St. Paul, and she plans to study physical therapy and/or athletic training.
Nelson and Steen will be attending the Section 8 Triple A Banquet in Mahnomen on Feb. 5, 2020.