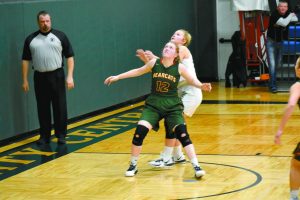 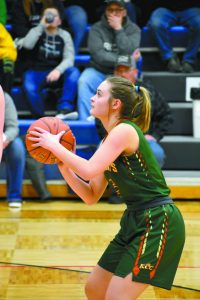 By Mark Johnson
KCC 53 – SAC 33
The Bearcat girls basketball team traveled to Argyle last Monday, Jan. 20, for the second matchup of the two teams this season. KCC fell to the Storm 46-51 just before the holiday break in a game that came down to the final few possessions.
The Bearcats and Storm played the early minutes of the first half with neither team being able to take significant advantage of the other team’s mistakes. It was about midway through the first half that KCC started to get the momentum in their favor and they took control of the game. The Bearcats defense did its job and held the Storm to only 6 second-chance points in the game and made every possession difficult for their opponent. The defensive effort turned into offensive opportunity and KCC took advantage and posted a 32-11 halftime lead.
KCC continued to stay in control of the game in the second half and never let the Storm get closer than a 15-point margin. The Bearcats continued to make plays on the offensive end in a variety of ways. They scored off turnovers, offensive rebounds and just plain good offensive execution. The Bearcats finished the night with a much needed 53-33 win and a head-to-head equalizer against the Storm.
Scoring leaders:  Marlee Turn 14, Morgan Olson 13, Mariah Olson 9, Cheyanne Scalese 7, Gracie Whitlock 6, Josie Steen  and McKenna Peterson 2 each.
Rebound leaders: Whitlock 9, Turn, Scalese and Steen 4 a piece
Assist leaders:  Steen 5, Jenna Davis 5
KCC 56 – BGMR 58
KCC returned to the court on Thursday, Jan. 23, with the same purpose they had on Monday night — to even the season series with their opponent. The Bearcats lost a close game in early December to the BGMR Gators 51-54 in Greenbush.
The first half of the game was a back and forth contest, leaving neither team able to establish momentum and build a lead. The Bearcats moved well on the offensive end of the floor and created a number of quality offensive opportunities but could not get the shots to find the bottom of the basket. Defensively, KCC held the Gators in check and did a good job of keeping BGMR off the offensive glass. The Gators held a slim 22-18 lead at the end of the first half.
The second half started out much like the first, with the two teams trading baskets and keeping the score close. The floodgates opened up midway through and the Gators started to drop shots from the behind the arc. In a matter of a few minutes the Gators blew the game open and pulled out to an 18-point lead. The Gators held that lead with three minutes to go in the game when the Bearcats made an impressive run that came up just a couple points short. The Bearcat defensive started to force turnovers and offensive chances and they closed the game to a single basket with four seconds left in the game. KCC’s comeback ran out of time as the Gators held on to capture the 58-56 win.
The game boiled down to two significant runs — one by each team. They knocked down a flurry of shots in the middle of the second half and got just enough separation to survive the big push we made at the end of the game. Both teams fought hard all night long. It is something we have grown to expect when the two of us get together.
Scoring leaders:  Morgan Olson 20, Marlee Turn 15, Cheyanne Scalese 7, Josie Steen 6, Gracie Whitlock and McKenna Peterson 4 each.
Rebound leaders: Whitlock 11, Turn 9, Scalese 7, Peterson 6.
Assist leaders: Davis 5, Turn 4.