By Josie Steen
This past week the Bearcat boys’ basketball team played two important games, winning both. On Tuesday, Jan. 21, the Bearcats beat the Red Lake County Rebels, winning 62-50. Friday night, Jan. 24, the KCC basketball boys beat long-time rival Stephen-Argyle 69-30.
Tuesday night’s matchup versus the Rebels was a battle throughout the game. The Bearcats eventually took the lead, winning by a 12-point margin of 62-50. The game started strong on both sides, but the Rebels took the lead with two early 3-pointers. In the first 10 minutes, RLC earned a 10-point lead, which was slowly chipped away by the Bearcats a few minutes before halftime. Once the Bearcats earned the lead, it was a back and forth battle. RLC had the lead at halftime, 23-21.
The second half also was back and forth, but near the 12-minute mark the Bearcats took the lead. KCC’s lead stretched from 2 to 10 until free throws in the final minutes allowed them to take the 12-point lead they would end with, 62-50.
Derek Peterson and Eric Gieseke led RLC with 13 points each.
Mitchell Docken led the Bearcats with 18 points and 8 rebounds. Kaleb Whitlock added 16 points. Jarrett Kujava contributed 13 points and 15 rebounds, Tucker Nelson added 8 points, and Evan Austad also brought in 7 points and 9 rebounds.
Friday night the Bearcats faced the Stephen-Argyle Storm in Hallock. The Bearcats started strong with a first possession 3-pointer and tough defense, which lead to a lead of 12-2 in the first five minutes of the game.
KCC’s consistent shooting grew this lead to 37-4 with just under five minutes remaining in the first half. By halftime, this lead stretched to 41-12.
Three early 3-pointers by the Storm in the second half lowered the distance to 45-20, but the Bearcats did not stop pushing. Continued efforts throughout the game lead to the nearly 40-point win, 69-30. Jason Lindgren led the Storm with 9 points. Jarrett Kujava led the Bearcats with 29 points and 10 rebounds. Kaleb Whitlock and Tucker Nelson each scored 10 points, while Mitchell Docken also added 8 points and 10 rebounds. Evan Austad scored 5 points, Nick Gjerde and Chisum Schmiedeberg each contributed 3, and Isaac Folland added 1.
This week the Bearcat boys play a double-header on Monday in Hallock versus Warren-Alvarado-Oslo at 7:30. Tuesday night they play at May-Port CG, and Friday night they play Grygla/Goodridge in Lancaster, which is also Parents’ Night. The Roseau game that was canceled on Jan. 17 is rescheduled to a double-header at Roseau on Saturday, Feb. 15. 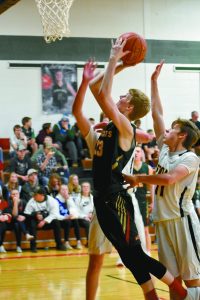