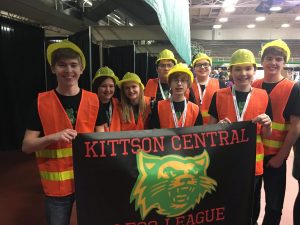 The Kittson Central Lego League Team participated in the state tournament on Saturday, Feb. 8. The team, made up of seventh and eighth grade students, received eighth place in the tournament that was held at Hyslop Sports Center at UND, in Grand Forks.
The team was placed in the North Dakota region this year along with another area school from Minnesota. The team has been working hard since early October building and programming their robot, developing and researching a project that affects our community and working on Lego League’s Core Values.
The team had three robot runs to try to gather as many points as possible in two and a half minutes while negotiating different obstacles. They presented their solution to “Flooding in Kittson County” before a panel of judges. They also practiced Lego League’s core values of Inclusion, Discovery, Teamwork, Innovation, Impact and Fun while being questioned and evaluated by a panel of judges.
After judging, the Kittson Central team placed eighth out of 40 teams.