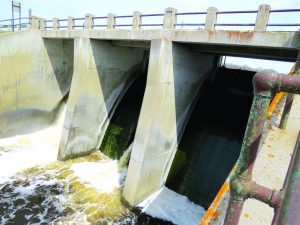 THE LAKE BRONSON DAM has been in dire need of repair, if not replacement, over the last several decades. Rep. Dan Fabian, D-Roseau, introduced a bill in the Minnesota House to fund replacement this year. (Enterprise photo)

By Anna Jauhola
Immediately, the first day the Minnesota Legislature was back in session, Rep. Dan Fabian, D-Roseau, introduced a bill solely to fund the reconstruction of the Lake Bronson dam.
House File 3191 proposes the sale of bonds for $20 million – as proposed in Gov. Tim Walz’s capital bonding budget – for dam safety. The bill states, “Of this appropriation, $18,000,000 is for the repair and rehabilitation of the Lake Bronson dam.”
“I’ve worked with the DNR on this issue. I recognize it’s important to the people of Kittson County and it’s just an important thing to do period,” Fabian said in a phone interview with the Kittson County Enterprise. “It needs to be repaired or replaced. We have to do it.”
Fabian said he took a couple days to draft the bill, stating all the ideas and thoughts were already “in the pipeline, so it was just a matter of taking those ideas and putting them on paper.”
The House heard the bill when the Legislature resumed its 2019-20 session on Tuesday, Feb. 11. The House then referred the bill to the capital investment bond committee. Fabian’s assistant was busy last week scheduling a hearing date for the bill to be heard by the committee.
He said he’s optimistic about this bill going through for several reasons. Sen. Mark Johnson, R-East Grand Forks, will introduce the same bill in the Senate. He said with the Republican-controlled Senate and the DFL-controlled House, it’s nice to have a priority item like the Lake Bronson dam funding on the majority side.
The Minnesota Department of Natural Resources is also behind the bill, as Fabian has been told by DNR officials they will testify about the necessity of the project. Also, the governor’s support was “a real shot in the arm” when he placed the project in his capital expenditures budget, which he released in January.
He believes this is the closest anyone has gotten to securing funding to replace the dam in recent years.
“I try to tamp down expectations so people don’t get worked up and have the realization that it may not happen,” he said. “I like to underpromise and overperform.”
As the bill moves through the Legislature, Fabian said the majorities can’t push it through alone. Everyone has to work together and it needs a supermajority in the House to pass. As the Democrats do not have the necessary 81 votes, they then need to persuade at least nine Republicans to also vote for the bill.
To convince legislators his bill is indeed worth passing, despite the hefty price tag, he will rely on data, evidence and testimony from dam safety inspectors. He will also rely heavily on testimony from those in Kittson County who work with the dam and inspect it every year.
Once a capital investment committee meeting is set regarding House File 3191, Fabian plans to invite local people and officials to testify about the important role the dam plays in recreation and the environment.
“I think we’ve come to a serious crossroads in terms of dam safety,” he said. “What I’m going to rely on is the testimony of experts who do dam inspections for the state. I’ll rely on them to create a sense of urgency and necessity for this. I’m pretty optimistic. I don’t think people are going to have a hard time understanding how important this is.”