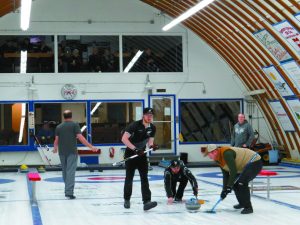 By Anna Jauhola
Through old ties from Hallock’s hey days of curling, three young curlers from across the world made their first visit to the United States on Sunday.
Brett Sargon, Benjamin Frew and Garion Long are from New Zealand and have been training in Morris, Manitoba, Canada, for the last six months with the goal of becoming Olympians. After a bonspiel in Winnipeg on Sunday, they traveled to Hallock for an exhibition game at the Hallock Curling Club.
“It’s a lovely rink,” Long said prior to playing.
But, Hallock’s is not the smallest they’ve visited since coming to North America. Just last week, they played at Halbstadt, Manitoba, where the tiny town has a two-sheet rink.
Their coaches are Lorne and Chris Hamblin, a husband/wife team who have coached and trained not only Olympic curlers, but many curlers of all ages and abilities over the years. They currently are the volunteer trainers at the Cargill Curling Training Centre in Morris.
“We farm in Morris and have been here (Hallock) many times over the years,” said Lorne Hamblin, who brought the team to town on Sunday. “(Our son) David’s on the farm so it gives us time to goof around.”
Sargon, 28, Frew, 24, and Long, 24, are a part of an outreach program through the World Curling Federation. They had their choice of training in Sweden, Scotland or Canada. They chose to train in Morris because the facilities provided more opportunity for learning.
“Our goal is to send them home where they all throw the perfect rock,” Hamblin said.
The Cargill Curling Training Centre is unique, he added, in that it has the only robotic rock thrower. The facility is open all year and offers a balanced amount of resources for the whole athlete including fitness, mental, nutrition and more, according to the website.
“We decided if we’re going to make a good run at making the New Zealand team, to improve curling back home, we needed to make a change,” Long said. “So we came out here for six months to train.”
Sargon also said they had a contact through an expat Canadian living in Auckland who knows the Hamblins well. The group has been in Morris since October and will complete their training in March. 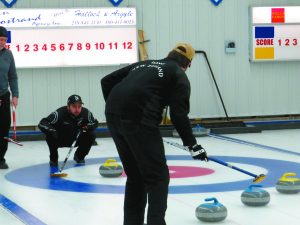 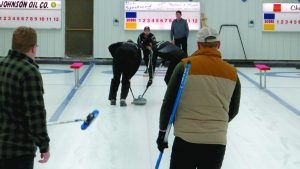 In their travels, Hamblin said they were particularly excited about visiting other curling clubs because their practice rink in New Zealand is on the southern island in Naseby. These young men are from Auckland, which is on the northern island. The Naseby rink is the only dedicated curling rink in the Southern Hemisphere.
“They really wanted to experience North America and the passion for curling,” Hamblin said. “So our goal has been to get them to as many rinks as we can. We’ve been to 20 so far. Hallock was the closest U.S. curling rink, so through friends of friends, I hooked up with Ryan (Anderson) and set it up for tonight. It’s wonderful. We’re excited to be here.”
Several curling club members and enthusiasts stopped by the rink to watch the locals and New Zealanders match up. The last-minute game came about when Hamblin contacted Dennis Wahl, who referred Hamblin to Ryan Anderson.
“I’ve curled against Lorne in Emerson and Altona before and Lorne has been down here,” Anderson said.
Hallock Curling Club member Andy Muir stepped in to curl with the guest team, as there are only three of them. Hamblin said the New Zealand team was very close to sending a fourth person, but was unable to do so. Intead, Hamblin said a sub often plays to complete the team.
Long said he and his teammates began curling in high school.
“I dragged Benny into it. Me and Brett played against each other multiple times and were members of the junior team together, then it just grew from there,” Long said.
The Olympics is the end goal for this team, but in the process, they have been happy to check off one more country in which they’ve curled.
“We have a few massive hurdles to get over first,” Long said of their journey to the Olympics. “From here, we go back home and do our national tournament. Then hopefully we get selected to play for New Zealand and go to the Pacifics and beat the likes of Japan, China and Korea, who are all very good teams.”
After that, the team would advance to the world competition where they would need to get enough points to qualify for the Olympics.
“We’ve got an uphill battle, but it’s a work in progress,” Long said.
In the meantime, the team enjoyed a good evening of curling and camaraderie in Hallock and will continue to find their best game through training in Canada. 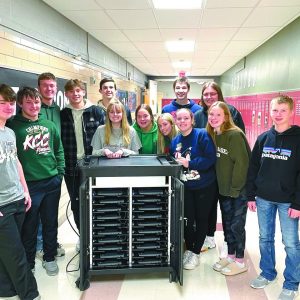 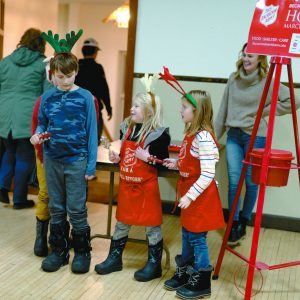