By Anna Jauhola
An independent organization supporting Minnesota’s presidential candidate shot a commercial in Kittson County this weekend.
The political action committee, or PAC, Kitchen Table Discussions, which supports U.S. Sen. Amy Klobuchar sent a crew to create a commercial in Hallock. They interviewed voters, shot scenes in Bean and Brush Creative Coffee and around Hallock, as well as on the Erickson Farm in rural Hallock.
“Voters in Kittson County have voted for Donald Trump by large margins, but they have also voted for Amy Klobuchar,” said Robert Carlbom, partner at United Strategies in Minneapolis, the firm overseeing the PAC’s venture. “We know the voters are thoughtful in Kittson County and they weigh their decisions on who to support carefully. We decided to highlight the fact that Amy is able to win in places where some Democrats don’t.”
The fact that President Donald Trump won by a landslide in Kittson County during the 2016 election and that Klobuchar also won the hearts of the county for her Senate seat shows Klobuchar’s ability to cross party lines. Carlbom and his partners, which includes Hallock native Sarah Erickson, were looking for another commercial to organize. Kitchen Table Conversations, a group of people and businesses excited about Klobuchar’s bid for president, reached out to United Strategies to help create the commercial. The turnaround time has been about a week, Carlbom said.
Saturday morning filming began at the Erickson Farm where the crew recorded and interviewed volunteer Jeff Mortenson, who supports Klobuchar for president.
“Out of all the Democratic choices there are, she seems the most level-headed, or normal, I should say,” Mortenson said. “She’s not extreme left or right, she’s right where she should be.”
Mortenson said he isn’t usually political, but agreed to be in the commercial because “sometimes it’s good to be a part of something.”
Several volunteers gathered at Bean and Brush on Saturday morning prior to the film crew arriving. Kathryn Rynning has supported Klobuchar since she first ran for the U.S. Senate.
“This is a privilege. I consider her an extremely capable woman and now that she is running for president, it is just very exciting,” Rynning said. “She is rising in the polls and she is getting many endorsements from big-city newspapers. I am very happy to be here and support her in any way that I can.”
The crew arrived and put their volunteers through a short stint of hair and makeup, and seated them at the front windows of the coffee shop.
A small local crowd had gathered and watched the proceedings. Rynning sat with Doris Mortenson at one table, and Matt and Melissa Casper gathered their children at another table. Others completed on-camera interviews in various locations.
“We’re here in Hallock to introduce folks around the country to Kittson County,” said August King, a film producer working under United Strategies. “It’s a picturesque community that Democrats are going to need to win to secure the presidency and no one knows that better than Amy Klobuchar.”
The crew edited the commercial over the weekend and it went live on Monday on YouTube. Television air dates are yet to be determined, but it will likely air around Super Tuesday, March 3, in several of the Super Tuesday states, which include Alabama, Arkansas, California, Colorado, Maine, Massachusetts, Minnesota, North Carolina, Oklahoma, Tennessee, Texas, Utah, Vermont and Virginia. These states hold their presidential primary elections that day. 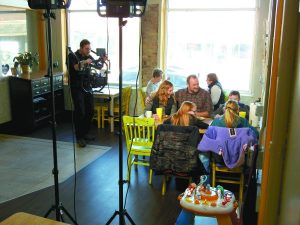