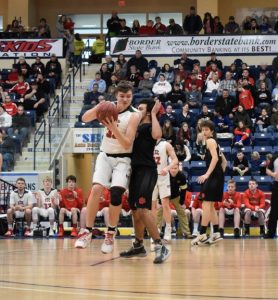 By Josie Steen
Last week the Bearcat boys’ basketball team finished out their season with two difficult playoff games.
Thursday night, March 5, they traveled to Crookston to battle the No. 4 seed Red Lake County Rebels. As the No. 5 seed, the Bearcats beat the Rebels 68-63. They advanced to the section quarter finals on Saturday to play the No. 1 seed, Ada-Borup. They lost to the Cougars 46-35. The Bearcats finished the season with a winning record of 18-9.
The Bearcats played RLC at the University of Minnesota Crookston on Thursday, hoping for a win in order to advance in playoffs. They defeated the Rebels 68-63 in a competitive game.
The Bearcats started strong, and gained a slight lead. The Rebels, with the help of senior Derek Peterson, fought to keep it a close game. The largest lead of the first half was held by the Bearcats, with a 9-point lead. The Rebels fought back and the halftime score only differed by 2 points, with the Bearcats up 27-25.
The second half remained a close battle. With three minutes left the Bearcats led by 10, but it was knocked down to the final score of a Bearcats’ 5-point win.
The Rebels were led in scoring by Derek Peterson, who scored 36 points and earned 8 rebounds. Jarrett Kujava led the Bearcats with 27 points and 11 rebounds. Kaleb Whitlock scored 16 points and led the team with 5 assists, while Mitchell Docken scored 10 points and led the team with 12 rebounds. Evan Austad added 9 points, Tucker Nelson scored 5 points, and Chisum Schmiedeberg topped it off with 1 point.
KCC traveled to the Ralph Engelstad Arena in Thief River Falls to face the Ada-Borup Cougars on Saturday, March 7. This playoff game did not end as happily, with the No. 1 seed Cougars beating the Bearcats 35-46.
The Cougars jumped to a 6-point lead before the Bearcats fought back and took a 9-6 lead. The game remained close for much of the first half, before the Cougars took a 9-point lead at halftime, 24-15.
Ada-Borup continued to grow the lead, taking a 13-point lead in the second half. This deficit remained during the game, with the final score ending at 35-46.
The Cougars were led by Preston Gwin with 16 points, and the Bearcats were led by Jarrett Kujava who scored 25 points. Mitchell Docken scored 4 points, and Tucker Nelson and Evan Austad each added 3 points. This game is an example of the Bearcats’ stellar defense. Ada-Borup averaged 73 points per game, and KCC held them to just 46, the fewest they scored all season.
The Bearcats had a successful season, winning 18 games while only losing nine. Five of these losses were within 5 points as well, with one coming in overtime and one in double overtime. Their defense was one of the best in the state, allowing fewer points than nearly every team this season.
“It was a very successful season, I am very proud of our team this year,” said Coach Chad Kujava. “We accomplished 14 out of 17 of our team goals, including going 9-2 at home this season, out-rebounding our opponents by 102 rebounds, and only allowing 46 points per game, which is fourth fewest in the state. I want to give a special thank you to our five seniors: Nick Gjerde, Jarrett Kujava, Kaleb Whitlock, Tucker Nelson and Mitchell Docken for being great leaders and playing hard, playing smart and playing together this season. It was lots of fun!”
Thank you Bearcat boys, and thank you to all of the Bearcat fans for the support throughout this season.