After teachers hired, center will open this summer

By Anna Jauhola
Despite talk around town, The Learning Tree Daycare is making strides to opening in Hallock.
Those in charge have been interviewing potential teachers and aides over the last couple of weeks with a final goal of opening this summer. Once those hires are made, the process will really speed up.
“We have taken our time because we’ve wanted to do things responsibly,” said Pastor Frank Johnson, Grace Lutheran Church. “Especially with all the donations, all the money all these people have given to the cause. We don’t want to put something out there that’s going to fail.”
The church, as discussed from the beginning, will serve as the umbrella under which the daycare operates, providing space and insurance. But a board of community members will govern its operation along with two co-directors. The governing board will work alongside the church council to ensure the daycare runs smoothly, providing a much-needed service to the Hallock and surrounding communities.
In November, when it was officially announced the daycare would open, they gave a tentative date of Feb. 3. This was to ensure they had enough time to advertise for and interview teachers. They began advertising for teachers at the beginning of December but didn’t receive serious inquiries until the middle of January.
“We do have a lot of promising applicants now,” said Administrative Director Marcella Bowman. “It just took a while for people to commit or for us to get the word out successfully.”
She said all the interviewees are from Hallock or the surrounding area.
While the organization has been interviewing candidates, Johnson and Bowman, along with Lead Teacher Marissa Romans, have been working on the logistics.
The state fire marshall and health inspector have both completed their inspections and the facility passed with few changes. Before the final inspection by the Department of Human Services can happen, everything needs to be in place as though the daycare can open the following day, Johnson said.
After teachers are hired, Romans and Bowman will be busy ordering everything needed for the daycare, which includes tables, toys, shelving, cribs, portable sinks, changing tables and a closed-circuit video/audio system. They will also procure outdoor toys for the playground area west of the church. Romans, who has a two-year early childhood education degree, will also be developing the emergent curriculum to use within the daycare.
“I’ve always been a homebody I guess. I’ve always wanted to come back home,” Romans said. “Even during college, I wanted to come back. I’m very excited to get started on this. It’s going to be kind of stressful at the beginning, but it’s so worth it. We definitely need this in our community.”
All the spaces have been rearranged to ensure the basement is clear for use as the daycare. The quilting group has been moved upstairs and the Cornerstone Food Pantry has been moved to the east side of the church upstairs. Other minor changes have been made, including Carr Construction knocking out a wall between two classrooms to make one large room for infants.
As they move forward, Romans and Bowman are asking for donations of gently used items such as books, toys and craft supplies. If someone is unsure whether an item they have could be used at the daycare, call the daycare’s new number or email them – both of which are listed along with this article.
Final costs per child per day are in place – $31/day for infants; $29/day for toddlers, preschoolers and summer care for school-age kids; $10/day for after-school care, which is two hours. Anyone interested in care can still call or email and get on the list, Bowman said.
The daycare will have eight spots for infants, seven spots for toddlers, 10 spots for preschoolers and up to 15 for after-school and summer care for school-age children. This gives the daycare a potential for up to 40 kids.
“That being said, when we aren’t full, then we could hopefully take drop-ins,” Romans said.
But, until the teachers are hired, which should be within the month, behind-the-scenes work will continue.
“The reality is we’re kind of at the mercy of when the teachers can start,” Johnson said. 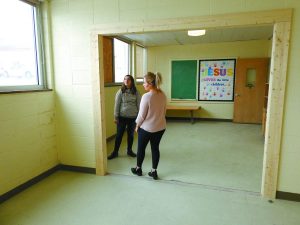