By Anna Jauhola
Through a grant, Lancaster School graphic design students are using drones to learn about technology and possible careers they maybe wouldn’t have considered otherwise.
The class has been learning how to use drones the school purchased with an Innovation Grant. Math teacher Becky Johnson, who also teaches graphic design and math trades, applied for the $5,000 grant knowing the drones would provide additional opportunities for her students.
“So we’re studying a little bit of technology, how technology is implemented and controlling the drones,” Johnson said. “It’s giving the kids a lot of good exposure to the technologies as well as careers that drones and aviation, in general, could possibly highlight them toward.”
The students have been practicing mostly in the gymnasium, but on nicer days they head outside to test the drones further. On Thursday, March 5, despite a chilly wind, the class headed outdoors. Their primary task was to practice their controls, which include taking photos and videos. At one point, a drone headed straight for a tree and began beeping.
“It won’t even allow you to bump into a tree,” Johnson said. “It starts beeping if it detects an obstacle and then it stops at a certain distance.”
Montana Knoll practiced using hand gestures to control the drone she used.
She even programmed it to follow her as she walked along the sidewalk. To take a photo, she simply waved to the drone.
To use the physical controllers, students must download an app to interface with the drone and place their smartphones in the device. They can then see through the drone’s camera to take video and photos. Using her controller again, Knoll positioned her drone to take a photograph of the class. They are programmed to only fly a certain height and will return to their starting location if the battery charge gets too low, Johnson said. This happened during class on March 5 where Knoll’s drone started beeping and suddenly shot up in the air and beelined for its original launch position on the sidewalk.
Johnson received the drones last spring, so she had the summer to learn how to operate them in order to teach her students.
“Extra things we’ve been doing is looking at rules and regulations, the graphics of it all,” Johnson said. “We look at the FAA rules to see whether we’re legally allowed to fly them. Then each student periodically takes a quiz on their phones when they plug them in to prove we know enough about them to fly them.”
Since these drones can’t fly above a certain height and aren’t being used commercially, licenses aren’t required. With the right amount of practice over the rest of the school year, Johnson said students will likely fly the drones to take aerial pictures of Lancaster’s annual Heritage Days celebration in June. This also includes the school’s 100th anniversary. The future for the drones may include some fundraising ideas, such as taking photos of local residents’ farmsteads or homes.
And because agriculture drives the area’s economy, they have been learning that many farmers and farm-related businesses now use drones to check crops and search out weeds. Johnson hopes students take away the expanse of possibilities these drones encompass.
“I think it’s just great exposure for the technology that is out there,” Johnson said. “And really the possibilities. Just all these advanced technologies, they’re closer than we imagine. Just allowing them to see that is a really positive thing for them to know the options out there and not limit themselves.” 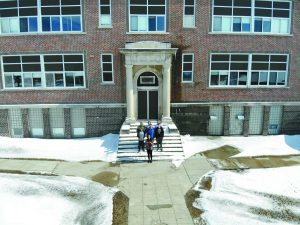 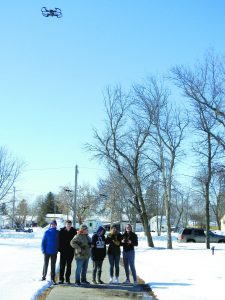 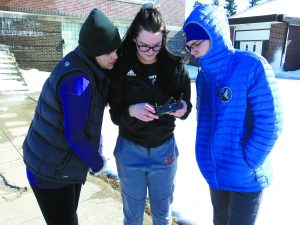