It was 41 years ago that the Kittson County Historical Society last published a history book, “Our Northwest Corner” – the one that is often referred to as the “tan one.”
The first history book (the “red one”) was published in 1976.
The residents of Kittson County are fortunate that there were a group of people in the 1970s that understood the importance of preserving history who volunteered their time and talents and put together these two Kittson County History books. They contain a treasure of information. Histories of the county’s families, the development of the county, the communities, churches, schools, organizations, etc., can all be found in these history books. However, there are now over four decades more of Kittson County’s history that needs to be compiled and put together into a book. A lot of history has been made since 1979 and it is time to preserve it for future generations, just as those volunteers did in the 1970s. Just think how much history would be lost if at that time they hadn’t taken the time to compile all of this information and put it into a couple of books. Fortunately, several county communities have compiled their own history books, but some of them date back nearly 40 years!
A history book project has been discussed at the Kittson County Historical Society board meetings with the idea that it should be completed and available in 2023 to commemorate the 50th anniversary of the construction of the museum.  The book would contain family histories, business and organization histories, school histories (just think how the school system has changed in the last 25 years!), historical events like the Hallock tornado, the Karlstad fire, the 1997 ice storm and flood, and, now, the pandemic.
Many of you are at home because of the pandemic so now is a good time to start thinking about putting together a story for this book whether it is a family history, business history, or your personal story of one of the historical events that happened in the county. Eventually, there will be a need for volunteers for this project, possibly as soon as next fall. So, if you are interested in being a part of this project, please contact the museum at 218-754-4100 or email history@wiktel.com.
To help inspire you to write your history, the KCHS will periodically be submitting random histories from the red and tan history books to the county’s newspapers. They may be slightly edited for space but they are written as they were submitted. 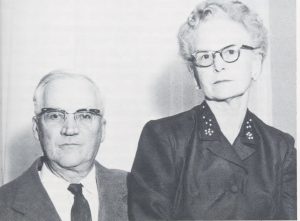 Glenn & Ella Richardson
By Ella Richardson
My husband, Glenn Richardson and I arrived in Bronson June 16, 1919, where Glenn was to assume the duties of station agent for the Soo Line. The first two months were very lonely. Practically everyone in town was Swedish and only the Swedish language was spoken – even in the churches. We had spoke only English so, socially, we were left alone. I cried buckets of tears but Glenn kept saying, “Don’t cry, we will not be here more than six months.” In time we made friends. Among them, the Olaf Erickson family – even though Olaf thought we were a couple of “wooden horses” because we couldn’t speak Swedish. After all he never spoke English.
Jonas Gudmundson came to work as night man in August 1919. How fortunate we were. He was there, a loyal, true friend all the years we were there.
Living in the depot had its ups and downs – 18 steps up and the same number down. For about seven years we carried water about a block – then we dug a well. That helped, but try to imagine all the water, coal and ice carried upstairs and all that had to be carried down again.
The depot was quite a busy place. All freight was hauled by train. Carloads of coal, lumber, gasoline and fertilizer came into town.  Carloads of grain and potatoes went out. When potatoes were shipped, after freezing weather came, cars had to be heated. At one time there were heaters inside the cars. The agent had to climb to the top of the car, drop down inside and replenish the coal. Ventilation was poor and gas formed inside the car, so I would watch to see that Glenn came out alive. Later there were heaters under the cars. Almost every week stock was shipped out of town. Farmers would truck in cattle and pigs, and the sheep herders would herd their flocks down the street to the stockyard. The stockyard closed Aug. 10, 1961.
When hunting season came, in September, several of Glenn’s Soo Line friends from Minneapolis came up for hunting. Prairie chickens and partridge were very numerous in those days and there were no bag limits. At night the birds were hung from the ceiling of the freight house – dozens of them. Deer season came and again the freight house was a good place to hang deer.
In March 1920, our son David was born and in April 1921, our son John was born. Both boys finished high school in Bronson. In a few years Donald married Myrtle Leen, whose father was section foreman. They moved to Minneapolis and have a son Bruce. When he was a little boy he loved to come to the depot. He thought it was wonderful to have an office in one’s home and a comfort station a quarter of a block away!  John married Celestine Berglund, a Minneapolis girl.
They have three sons, Kelly, Scott and Stephen, and a daughter, Mary. The boys enjoyed being in the depot. The telegraph instruments, old kerosene lanterns, the hoop to hand messages to the engineers, were all very intriguing.  Best of all were the trains coming right by the windows – they never missed one – at 10 p.m. or 4:30 a.m.
Electricity came to Bronson about 1921 but the depot did not have it until three years later. The Soo Line was very reluctant to modernize the depot. Bronson got city water in 1954, but not the depot.
Six months stretched into 41 years and on March 24, 1960, Glenn’s 65th birthday, he retired from the Soo Line. He had worked for them 47 years. The depot closed in 1965 and now stands near the Kittson County Museum in Lake Bronson – a reminder of the past.