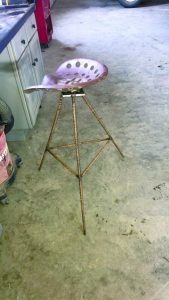 By Anna Jauhola
Shop teachers and students at Kittson Central and Lancaster have not been deterred by the lack of classroom time. Since schools closed in Minnesota due to the COVID-19 pandemic, hands-on classroom teachers have had to get creative. Some students were able to bring projects home and finish because they had room and the tools available. Other students will leave projects until they return to school.
In Lancaster, Michael Peterson has given many of his students a “choice board.” Each week, students must accumulate 20 points worth of projects from the choices given on the board. Some include hang a picture on the wall, paint something, fix a broken hinge, take out the garbage, clean your room and shovel snow. Peterson prefers teaching in a hands-on capacity and found this to be a good solution.
“Traditionally this time of year we’d be doing hands-on stuff. I really didn’t want to go backward and do worksheets again,” Peterson said. “It’s worked out really good. “The kids have really liked it and in the end I think the parents are going to like it too.”
His students have been creative as well. One student asked if he could include a building project he’s working on at home toward his points. Peterson said, “Of course!” and only requires that he send in photos of the project every week.
“Some of these are basic and some are a little deeper,” he said.
The easiest class to plan for and execute remotely for Ed Lehrke at Kittson Central has been computer drafting. His students have used the software program SolidWorks at school, but Lehrke pushed forward his idea of using a web-based program when distance learning took effect. The kids are now using Sketchup, which is available through Google Suite.
“You can draw things, list measurements, build curriculum,” he said. “It shares easily through the Google Suite too.”
In Lancaster, Peterson has had some of his students working on drafting as well, often using website estimators for assistance.
If there has been a silver lining throughout this entire situation for the shop class in Hallock, it’s been the outpouring of help from professional teachers associations. For example, Lehrke found a totally free auto mechanics curriculum for his class to complete their at-home assignments.
He received an eBook and electronic workbook access for each student. Last week, they read a chapter on automotive fluids, completed the workbook sheets and then found locations for those fluids on a family vehicle.
“So believe it or not, auto mechanics is a class I feel we are doing well in. Are we doing as well as we would be in the shop? Probably not,” he said. “However, to some degree, I found a structure I didn’t previously have that is working pretty darn well.”
Lehrke hopes to incorporate this curriculum into his future auto mechanics classes due to the solid framework.
“It will change my classroom,” he said.
Both Peterson and Lehrke are collecting tree sap this year – Peterson for the first time. Lehrke has collected sap with his students for the last several years and then make syrup as a part of a spring project. Peterson and his Outdoor Adventure students tapped several box elder trees and two maples in Lancaster before school was dismissed.
“I ended up making the first batch of syrup last week,” Peterson said.
He had collected 9 gallons of sap from the trees he tapped. He and those who have observed were surprised at how much sap looks like water. He plans on making another batch of syrup this week and make a jar of syrup for each of his students.
“It would have been nice for them to see it hands-on, but they Zoomed with me when I checked the sap,” Peterson said.
He also made a video of the syrup-making process to share with the kids.
“It’s fun. I’ve learned as much as they have,” he said. “I’ve also learned the ropes for another year so when we’re back in school, I get to teach it again.”