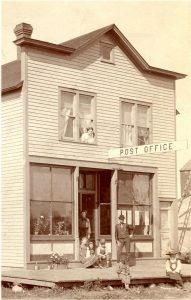 The Smith Post Office, which was also their home, shows the family outside and looking down from one of the windows.

The coming of the Soo Line in 1904 marks the beginning of the village of Lancaster. The village is located in a very fertile area of Kittson County, near the North Branch of the Two Rivers.
It was named for an official of the Soo Line, believed to have come from Lancashire County in England. From a business standpoint, Lancaster is situated in one of the most active areas of the county. A tremendous business potential has served as a help to the village. Population at one time was 535 and the town was booming. Today (1976) the population is 382.
The first businesses established were the Lancaster Mercantile Company owned and operated by Emil Swenson and Claus Lindblom; a hardware store built by W.A. Lindgren in partnership with A.C. Holmquist which later burned down; a general store built by Ed Smith and later operated by his son, Elmer; another was the pool hall built by E.A. Hicks but this building has been demolished; and a lumberyard was opened by Robertson Lumber Company with John Foster as the first manager and Bruce Steen is in charge at the present time. Other businesses through the years have been the publishing of “The Lancaster Herald” and the Lancaster Livestock Shipping Association, which was started by Alfred Malm. The potato warehouse was once a cooperative venture but is now privately owned. A Lancaster Cooperative Locker Plant was established but later closed. Other businesses were a depot, laundromat, hotels, elevators, two banks, Lund Hardware Store, Livery Stable, Beauty Parlor, Shoe and Harness Shop, Mrs. Horace Johnson’s Millinery Shop and two dress shops. At one time there was a doctor’s office here with Dr. Dahlquist as the first doctor, later Dr. Stratte and Dr. Brook.
At the present time there are two grocery stores, one owned by Floyd and Glen Sanner and the other by the Lancaster Cooperative Association. There is a hardware store owned and operated by Mr. and Mrs. Gordon Nelson and an implement store owned by Howard Ward. Other businesses are Homstad’s Garage, Bernstrom’s Service Station, the Cooperative Oil Station, Susan’s Café, Karl’s Recreation operated by Alice Homstad, the Post Office with Warren Glad as Postmaster, a Municipal Liquor Store, Creamery, Farmer’s Elevator, the Northcote Elevator, a Standard Oil Bulk Station with Sheldon Carlson as agent and a well-equipped Fire Department. There is a law office operating one day a week and located in the new City Hall, a dental office with Dr. Hoffman, ad a Barber Shop with Royce Glad as the barber. There are two mail routes out of town with Orval Lund and George Sandul as carriers. The Port of Entry is located ten miles north of Lancaster.
Major improvements in the last years are hard surfaced streets, city water, city sewer system and lagoon, street lights and several new homes.
Education attracted the attention of the settlers of this community. The earliest school was held in the Olaf Dahlman kitchen. This was started in the early 1880s. One of the original students, Emil Dahlman, is still a resident here. The Lancaster School district was created in 1905 , and a frame building was erected. Today we have an up-to-date brick building opened in 1920 with an auditorium added in 1954 and the elementary and science departments added in 1962.
The first church was the Saron Lutheran church in Thompson Township. Records show that the Sion Lutheran Church was organized in 1909. A parish hall has since been added and renovations made in the church. The Methodist Church was organized in the spring of 1906 and is still in existence but now is owned by the Seventh Day Adventists. Lancaster also has a Mission Covenant Church, established by a group of worshippers who have since supported it. The original church was burned down and has been replaced by a building purchased from the Kennedy Lutheran Church.
Organizations at present in Lancaster are the Parent-Teachers Associa-tion, American Legion and Auxiliary, Lion’s Club, Business Men’s Club, Royal Neighbors and Woodmen, Senior Citizens and also various church organizations, such as: Lutheran Church Women (LCW), LW Circles, Luther League, Mission Covenant Ladies Aid and a WCFU organization.
Ed Smith was the first postmaster. Halvor Elfstrom built the first residence, presently the home of Mrs. Algot Erickson. W. A. Lindgren operated a funeral home in the rear of his Implement Store. Robert Kruse was the first Fire Chief and his department consisted of a bucket brigade. Emil Dahlman, presently occupying the Fred Johnson house, was one of the original students of the first school conducted in his house in the summer. The first teacher in the Lancaster School was Miss I. Kohl, who had 50 pupils and all grades. 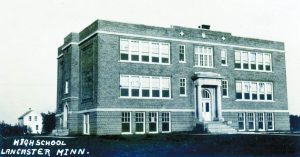