From 1912 until the fall of 1929, Kittson County was the home of Frederick McKinley Jones, self-taught engineer and inventor who held over 50 patents for his design of a transport air conditioner unit. He was the first African American to become a member of the American Society of Refrigeration Engineers.
Fred “Casey” Jones was born in 1893, in Covington, Ky. He was orphaned at seven, lived with a priest until he was 11 when he quit school and went on his own, working at any job he could find involving mechanics, cars and machines. Fred built race cars in Cincinnati, roamed the South where he found a “black” man could not be hired to fix “white” men’s cars, and went to Chicago where he met a potato grower from Kittson County who told him about the Hill Farm, which needed someone like him to keep machinery operating.
Fred Jones was 18 years old when he came to Hallock on Christmas Day, 1912, in a blizzard. He arrived in a livestock boxcar with the C.S. Miller family from Effingham, Ill. The Millers were moving to a farm they had bought between Northcote and Humboldt.
It was at the Hill Farm that Fred was nicknamed “Casey”. He worked there until the farm was sold in 1916. Then he worked for Oscar Younggren, built a race car and became an outstanding race car driver. He built a portable X-ray and designed improved surgical instruments for Hallock doctors. He built radios, snow sleds and gadgets to make machines work better. He wired many homes for electricity. He and Clifford Bouvette built a powerful radio transmitter, which was used for years to broadcast news in the area.
Fred Jones put together a sound track for Duffy Larson in the old Grand Theater, which provided better “talking movies” than theaters using commercial sound tracks. News of this accomplishment reached Minneapolis where Joseph Numero, who also built sound tracks, asked Casey to come work for him.
In late 1929, Fred Jones left Hallock to work for Mr. Numero.
From this association, the Thermo King Company was born. Using Fred’s ideas and design for a portable air conditioning unit, Thermo King became the leader in the production of transport refrigeration. It supplied refrigeration to the armed services all over the world during World War II.
The Thermo King refrigeration units seen today on trailers, trucks, vans and box cars, are basically the same design Fred “Casey” Jones invented in the 1930s.
Fred died in 1961. As a veteran of World War I, he was buried in the Fort Snelling National Cemetery in Minneapolis. His wife, Lucille, who now lives in Arizona, is Fred Jones’ only survivor. 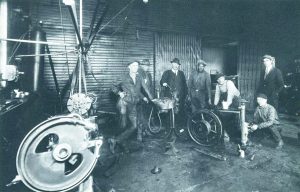