By Anna Jauhola
During a downpour, tornado warning and hail, the Kittson County Highway Department shored up erosion around a culvert where the road nearly collapsed on County Road 5 last week.
Assistant County Engineer Keith Klegstad told the county commission on Tuesday, June 9 at its regular meeting they had five loads of clay hauled in to stabilize the road and one load of rock.
“Water comes inland from two different directions,” he said. “And it’s pouring in pretty good either way between the two arch pipes. It was very close to undermining the road.”
County Road 5 runs between Lancaster and Highway 175 at Hawkyard Corner.
The pipe is located about 2 miles south of Lancaster near Christopher Engstrom’s home. They also found a hole on the north side of the township line. While Klegstad and his engineering crew measured it to figure out a solution, Survey Crew Chief Ryan Swenson fell through to his waist. He was all right, Klegstad said, and the crew got the hole repaired as well.
“Imagine hooking a garden hose up to a water tower and turning it on. That’s what’s going through those pipes,” Klegstad said, referring to many culverts handling massive amounts of water. “It’s violently shooting out that end.”
From Saturday through Monday, the area got anywhere from 1.5 inches of rain to more than 7 inches. According to reported totals, Caribou Township had the most rain at 7.6 inches. Poppleton Township reported 6.18 inches over two days while Thompson reported 5.35, Richardville reported 5.25, Granville reported 5.21, Hampden reported 5.18 and St. Joseph reported 4.78.
County Road 5 was closed through most of Tuesday and opened back up Tuesday evening. The department will keep an eye on the area and completely inspect the repair when waters recede.
More severe overland flooding east of Lancaster caused the highway department to close down County Road 4 from Highway 59 to County Road 15 so they could help alleviate the flow and protect a personal tract of property.
The highway department spent the rest of the week driving every county road to probe every culvert. Although bridges are also in danger of erosion and loss of stability, Klegstad said he’s more worried about smaller culverts. And not just on gravel roads, but blacktop roads – like at Grasshopper Corner on County Road 1 north of Hallock – where he’s never seen water go over.
“We’re knee deep, literally,” he said. “It’s pretty wide spread all the way from Highway 11 to the border. We’ve got issues everywhere.”
He added that the highway department employees are tracking their time spent on water issues separately like it is a flood. He said there’s the possibility for emergency funds from the state.
At the courthouse, Administrator Eric Chrisensen noted the sheriff’s department had water again on Sunday, June 7 due to the heavy rains. This is a regular problem because the parking lot slopes toward the building and when water from the roof has nowhere to go, it flows into the southeast stairwell.
“Short of filling that entire stairway with concrete and using a different entrance, there’s no solution to fixing the flooding,” Christensen said. “It’s always going to be susceptible to flooding because of limited capacity to drain this property.”
They sandbagged the doors to the sheriff’s office and sucked the water from the stairwell using a sump pump. Other times this has happened, the fire department has used a trash pump to clear the water.
In other business, the commission:
• Approved hiring Hope Sele as the new UofM Extension clerk at B21-1, Step 1 on the payscale. She will be paid $17.37 per hour and her start date is Monday, June 22. Extension 4-H Program Coordinator Kaitlin Barbosa has recently received permission from the state to return to work for a couple days a week – she was off due to the COVID-19 epidemic. On the days Barbosa is in the office, she will train Sele. The other days, Sele will do online training for her passport duties. Barbosa may be back in the office full time in July.
• Approved an abatement request from Kennedy resident Tamara DeVore. She applied for full residence homestead last year and provided the final information in November, which should have given her 100 percent homestead credit. This was not applied and the abatement for taxes and penalties is $1,374.97.
• Heard from Christensen that Gary Weiers of DDA Human Resources will be in Hallock to visit with the commissioners and department heads individually about what they’d like to see in administrator candidates. The commissioners agreed the pay range should be between $95,000 and $115,000, depending on experience.
• Approved obtaining quotes from three companies to contract information technology, or IT, services for the county. Corporate Technologies LLC contacted the county to give a quote, and the commissioners agreed it would be good to get quotes also from RediTech (formerly Insight Technologies) and Wikstrom Telephone Company.
• Heard that interviews for the county engineer position are postponed until the county has cleared up its water issues after heavy rains doused the area last week.
• Approved summer employees Jagger Olson, Zach Pastir, Amy Olson and Kayla Gonshorowski.
• Heard request from Bollig Engineering for the commissioners to review and comment on the airport development site selection study. The study is on the City of Karlstad’s website, cityofkarlstad.com. Anyone can view and comment on it. 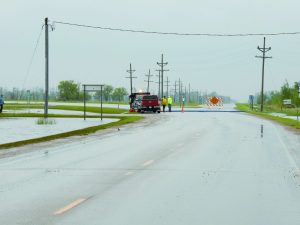 PODCO IN LANCASTER had 2 inches of water throughout its building early last week due to severe overland flooding. With help, they got the water pumped out and were working on clearing the water outside on Tuesday, as shown above. (Enterprise photo by Anna Jauhola) 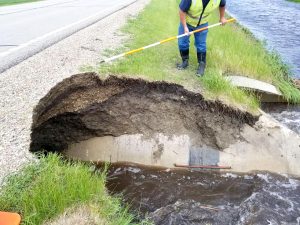 A KITTSON COUNTY HIGHWAY DEPARTMENT employee works along County Road 5 last week after flash flooding eroded the structure around two culverts. This damage seriously compromised the area, but the department was able to stabilize the road and will check on it as the water recedes.
(Submitted photo)