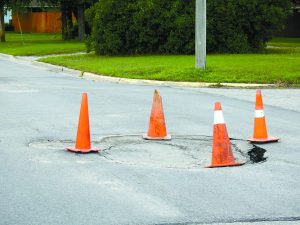 SEVERAL CITY STREETS in Lancaster have spots or manholes that have sunk due to extreme moisture from the last two months. The city maintenance crew has already fixed many of these spots and Clerk Carol Johnson has submitted estimates for costs to recoup from the state.
(Enterprise photos by Anna Jauhola)

By Anna Jauhola
A sinkhole on River Road west of Lancaster had residents and council members concerned last week and discussing the issue at the monthly council meeting on Tuesday, July 14.
Roy Stenmark brought his concern to the council.
“Every time I come around that corner, I hope I don’t find somebody laying there dead,” Stenmark said, who lives south of the sinkhole. “It’s serious.”
The gravel road intersects with County Road 6, which runs through Lancaster, just before the bridge going west out of town. About a half mile down River Road is a curve where the sinkhole developed above a damaged culvert.
The problem was, no one knew if the sinkhole lay inside city limits – because parts of Lancaster’s limits lie in undeveloped areas – or if it was within Granville Township’s purview.
Mayor Mike Olson told Stenmark that Anderson Bros. Construction was at the site a week prior, but then another 4 inches of rain fell and they weren’t able to fix it.
Councilor Faye Potrament said she was also concerned about the hole as she drives by it.
“Every time I come around that corner, I think if you were going any speed at all, you’d be in that hole,” Potrament said. “It’s bad, but I didn’t know who was responsible.”
Stenmark asked the council to fill it in with rock to stabilize it, at least, until whoever is responsible can get it fixed.
“The splice between the two culverts has let go and the road has kind of eroded on the south side,” Stenmark said. “I was thinking you just lay some asphalt shingles over the hole (in the culvert) and dump rock in there because gravel and dirt go right through the pipe and it just keeps eroding. We got to do something.”
Later in the week, Granville Township Chair Brent Pearson gathered other township officers to view the sinkhole. They found that the city of Lancaster had indeed repaired the hole with rock and gravel.
“We’ve had a culvert there waiting to be installed for quite a while,” Pearson said. “But the people who are going to be doing that have been so busy with other roads that really got hit. They’re planning to have that culvert put in this summer.”
Now the sinkhole has been fixed, as long as there is no more rain, that area is stable, Pearson said. He said that section of road has been a problem before where water would overtop the road. So the township board agreed a new, larger culvert was necessary to help the water go under the road instead.
“It’s fine now, but if we got another couple inches of rain, that’ll wash out again,” Pearson said of the sinkhole.
The council also dealt with its own water issues in town and approved repairing sunken manholes on various streets. Clerk Carol Johnson tried to get estimates for damages from various people, but received no feedback. She submitted $47,000 to the state for damage caused by the excessive rains, but is not bound by the number she gave. The state will cover 75 percent of the cost while the city will have to cover the rest. However, they could also file an insurance claim and only pay the deductible.
In other business, the council:
• Approved paying for mosquito spraying at $1,950, which included spraying the city twice and Riverside Golf Course three times. The council also approved spraying the city and golf course once a week until August as long as the golf course pays half of its cost.
• Discussed a dog that has been causing problems in town, for which all council members have received complaints. Johnson reminded the council there is a leash lawn and Mayor Mike Olson said he would visit with the dog’s owner.
• Reviewed the preliminary budget for 2021, but tabled any decisions to the August meeting.
• Approved an information disclosure request form for Clerk Carol Johnson to have on hand for anyone to fill out who requests public information.
• Approved applying for $24,862 in coronavirus relief funds available to the city. Johnson said she has been keeping track of costs the city has incurred due to the coronavirus. As she learns more about how the money can be used, she will update the council. But they had to apply for the money by Sept. 15 to receive it and use it.
• Approved the Lancaster Fire Department to purchase new fire gear not to exceed $2,200.
• Approved temporary leave for George Zondagh from the fire department for up to one year.
• Approved a change order of $6,900 to Maguire Iron, Sioux Falls, S.D., who is painting the watertower. They need to replace equipment that covers insulation on some piping with aluminum because the pipes are so corroded the paint will flake off in a few years. “It’ll cost more if we have to have them come back and redo it,” said Mayor Olson.
• Approved the sale of a lot to Jason and Shannon Langerud, owners of J & S Foods. The lot sits next to the grocery store property and the city sold it to the Langeruds for $500, which is the typical sale price for a lot in town, plus the recording fee. The city will pay attorney fees.