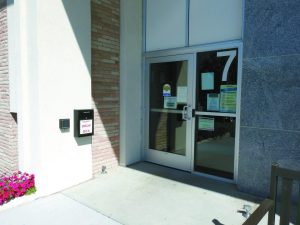 CUSTOMERS CAN DROP BILLS AND CORRESPONDENCE in a dropbox located at door 7 at the Kittson County Courthouse in Hallock. Masks are now required for anyone entering the building. (Enterprise photo by Anna Jauhola)