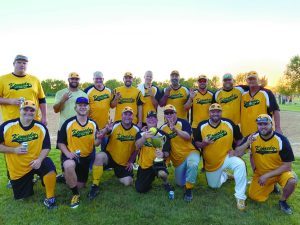 By Butch (Coach Gardy) Fossell
Two weeks ago Kennedy Pioneer Seed/VFW claimed its first Warren League Championship and prepared to defend its two-time league championship title a week later. Due to a Covid-19 shortened season the league tournament was a winner-take-all among all teams.
On Tuesday, Aug. 11, the team loaded onto the team bus only to discover a dead battery. Hopefully, this was not an omen of things to come.  Ang (Andy Kirkeby), who is a good driver quickly hooked up the battery cables and the team was on its way to Warren to take on the Warren Young Guns in a loser-out game.
Warren, vast underdogs, came determined to play and after 11/2 innings found themselves in a possible upset win with an 8-0 lead.
Kennedy pitcher Konga (Kevin Hanson) was being rocked and Coach Gardy was thinking of a possible pitching change.
Kennedy’s bats had been held silent until Elmer (Brett Lindgren) led off the second with a huge home run getting Kennedy on the scoreboard.
With single hits from Dillie (Dylan Bowman), Daltie (Dalton Klegstad) and a double from Stinger (Ryan Ingeman), Kennedy scored two more making it 3-8.
Pitcher Konga appeared to find his groove and mowed down Warren the next innings. Kennedy scored three more runs in the fourth with singles from Ang, Mitcharooni (Mitch Jensen), The Boy (Scottie Mortenson) and a double from Daltie.  Score: Warren 8 to Kennedy 6.
Kennedy’s bats exploded in the fifth with consecutive hits from Boke (Travis Bogestad), Elmer, Konga, Ang, Mitcharooni, The Boy and a home run from Daltie scoring seven huge runs making it 13 to 8 Kennedy.
Warren threatened in the sixth but did not score.  Kennedy came to bat hoping to score a few insurance runs and quickly got base hits from Boke, Elmer and Konga. With bases loaded and no outs Ang came to the plate hoping to keep the hitting streak alive. Ang saw the first pitch and knew it was his and swung the bat hitting his first ever home run and better yet a grand slam. Kennedy’s bench was ecstatic and needing one more run for the win got base hits from Mitcharooni and The Boy with Dillie singling, driving in Mitcharooni with the final run making the score 18 to 8.
The championship game came down to Kennedy versus arch rival Mick’s who defeated Bremer Bank in their opening game.  Kennedy, the high seed, knew they had to play an errorless game as the two teams had split their season games making it anyone’s game to win.
Mick’s came out swinging and quickly scored three runs.  Kennedy could not fall much further behind before the game got out of hand.  Kennedy’s bats were held silent the first two innings except for a lead off single from Dillie. After being roughed up the first inning, pitcher Konga held Mick’s scoreless the next four innings. Kennedy got on the board in the third with a lead off homer from Konga and a grand slam from Daltie making it 5 to 3 Kennedy.
Kennedy scored two more in the fourth with solo home runs from Ry (Kyle Langen) and Elmer.  Veteran player Drewfus (Drew Mortenson) who has been battling a sprained foot after making a game winning catch several weeks earlier was stranded at first after singling. The score stood at Kennedy 7, Mick’s 3.
Mick’s bats weren’t done, scoring two in the sixth on a home run turning the game into a nail biter at 7 to 5 going into the final inning.
Tension built quickly as Mick’s led off with a single.  A home run tied the game. Coach Gardy called time out and Assistant Coach Boomer (Nate Bowman) walked to the mound trying to calm down his pitcher. It worked, and with spectacular defensive plays from shortstop Hickory (Zach Rynning), Konga took the next three batters down preserving the hard fought 7 to 5 win and a three-peat championship for Kennedy.