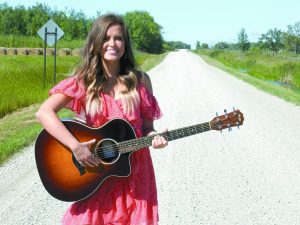 DARIANN LEIGH finds inspiration for many of her own music and lyrics on the back roads of Kittson County, such as this one. (Enterprise photo by Anna Jauhola)

By Anna Jauhola
KARLSTAD — True to country music, much of Dariann Leigh’s inspiration is drawn from her rural Minnesota life – good friends, back road cruising and family.
Leigh grew up in Karlstad, Minn., and now the 20-year-old splits her time between her hometown and Nashville, the nation’s country music capital. The young artist relies on her strong work ethic learned in northwest Minnesota to strive toward a life-long country music career. Due to the COVID-19 pandemic, much of Nashville is shut down so Leigh is currently at home base in Karlstad, working on ventures around the area for filming and photo shoots.
She is currently finishing up work prior to the debut of her newest single, “Closer.”
“It’s the second song I’ve recorded that I didn’t personally write, which is really cool because you get to put a little bit of your heart into something that someone else has put their soul into,” Leigh said.
The song, written by Jennifer Adan, Justin Adams and Megan Moreaux, is about moving on to another phase of life, something everyone can relate to.
“Closer” is set to release at the end of September, but presales started this week. All this comes on the heels of her previous single, and first-recorded song written by other artists – Emily Fortney and Skye Claire – “Wherever I Go.” This song has also brought her quite a bit of notoriety because it hit No. 45 on the Music Row charts.
“Which is insane and really, really cool,” Leigh said.
A music video accompanies this song, which was shot in and around Las Vegas.
Leigh’s first big success came last year when her single “Give me a Minute” and the accompanying music video garnered her two nominations from the Midwest Country Music Association. She was up for New Artist of the Year and Music Video of the Year. Although she did not receive the awards, she found it an overall exciting experience.
“It’s really humbling to be up for that because I know everyone else who was up for the awards,” she said. “It’s a really big family and humbling to be up for awards with people I consider to be friends and family.”
She said the entire night was fun as she got to dress up and perform at the awards show, which was held at Medina, Minn.
Although music has been a driving force in Leigh’s life, especially to help her through tough learning during school, it was not always a final goal to become a musician. She participated in church and school musical events, but it took a stint at college to realize her true passion.
Leigh attended the University of North Dakota in Grand Forks for English education and music education. Although English goes hand-in-hand with writing, teaching was not Leigh’s final destination.
“I went to college for a little while, but realized music is where my heart lies,” Leigh said.
Both she and her parents, Lori and Corey Wikstrom, saw her leaning toward a different endgame.
“With deciding I want to go for music full time, professionally, my horizons broadened by a never ending amount,” Leigh said. “It’s a domino effect once you decide to go for what you want. Although sometimes you have hiccups, everything seems to fall into place in a way and you get a taste for exactly what you want.”

There was no question Leigh would choose to focus on country music, considering her home was filled with the likes of Johnny Cash and Shania Twain growing up. She is also inspired by artists such as Maren Morris and Carly Pearce, who emulate the classic era of country music. She is particularly a fan of Shania Twain.
“I have yet to meet Shania Twain. That’s the person of all my dreams to meet, Shania Twain, so I’m hoping to meet her some day and say hi,” Leigh said. “That would be really cool. It’ll probably be the one time in my life that I’d hardcore fan-girl.”
Aside from artists, Leigh said she draws inspiration from her family, friends and her hometown and county. Her mom and dad, as well as her brothers, supported her decision to hit Nashville, but her cousin Mariah (Koland) Martinez has also been a big influence – Leigh looks up to her as a sister, her values and how she conducts herself.
“She’s done huge things in influencing and inspiring me in my life,” Leigh said.
Karlstad and Kittson County have also played a big role. Leigh spent countless hours cruising the streets of Karlstad and the back roads with her friends. The small-town atmosphere is completely different compared to experiences relayed from her Nashville small-town friends.
“For me, it’s been a huge inspiration growing up here, feeling really safe and feeling blessed with faith,” Leigh said. “It’s influenced my writing whether it be from school and growing up here, or family, or just literally as simple as driving around on the back roads. It’s all been really influential on my life and my country music.”
She also credits her roots in Kittson County for her drive to work hard for what she wants. She counts herself lucky to see the drive and ambition people in the area have for their livelihoods, personal lives and being good neighbors and friends.
She has been performing on stage for most of her life, but when she’s up there as an artist, she finds she is at home. The only time she is nervous on stage is when asked to perform “The Star Spangled Banner.”
“It’s huge. It’s the song of our country and it’s something I want to do right,” she said. “I can’t count the amount of times I’ve been singing it and I have to hold the mic with two hands because my hands are just shaking.”
While COVID dominates the country, Leigh isn’t on tour and is instead working hard on the business side of her career. She has been learning the ins and outs since she was 17 – marketing, contracts, social media and so much more. She’ll often get up early, typically to do an interview, then practice music and record something for social media. She’ll also handle some meetings and business, then perhaps stream a live video on one of her platforms.
Normally she’d be performing three to five times a week, but during this downturn she has been working from Karlstad.
“Which is pretty wild, because I don’t think I’ve been home in Karlstad this long since high school,” Leigh said.
She did some filming and photo shoots at Old Mill State Park, rural Karlstad and Brainerd for the release of “Closer.” And she will perform at Newfolden’s NewFest this weekend, along with The Jensen Sisters, who hail from Goodridge.
Her journey thus far has opened so many doors into the music industry. She has faced the challenges of working in the fast-paced Nashville circuit and learned how to navigate the music world, all while continuing to write her own music and lyrics as well as work with other talented artists.
“You can find doors that block certain things, but I guess for me it’s like a mental game as well,” she said. “It’s such a personal thing, writing songs. You get desensitized to not being able to or being able to buck up and take the no sometimes. You really learn how to grow from it, so when you get the yesses, it’s really rewarding.”
Within the next two years, Leigh hopes to record and release a full album. She has recorded singles and an extended play record, but a full album is a big step.
“One of my other long-term goals that I think a lot of country artists have is performing at the Grand Ol’ Oprey. That’s the biggest dream,” she said.