By Coach Tina Turn
Kittson County Central opened MEA week with a Monday night game in Karlstad where they took on the Northern Freeze in the Freeze’s first match of the season in a Northern Lights Conference contest.
Serving was strong for the Bearcats all night, but in set one it was particularly strong. Senior setter, Gracie Whitlock, punched in three straight aces to help her team to an early lead. Juniors Jenna Davis and Cheyanne Scalese each added an ace, but it was senior Courtney Fredrickson’s string of 11 serves that helped to end the set with a 25-8 win.
In set two, it was Davis’s turn to start the game with a string of serves, 9 to be exact, 2 of which were aces. Kira Whitlock and Scalese both added in an ace, while both Scalese and senior McKenna Peterson swung for 4 kills each to pace the Bearcats in a 25-13 win.
Set three proved to be a closer match for the Bearcats as they made 5 errors early in the set to hand the Freeze 5 of their 6 first points. Fortunately the Cats served 100 percent in the set with 4 aces, and that plus Scalese’s 4 kills helped to seal the deal 25-19 to take the 3-0 conference victory.
The girls were so relaxed that night, and their energy was high, which was nice to see on a Monday night because sometimes Mondays are a tough night to play.
It was great to see a second match with double-digit aces recorded, and we increased our serving percentage to 95 percent. Our tough serving really helped to keep the Freeze from finding an offensive game and it was really fun to see junior Cheyanne Scalese really hit her stride in the second match of the season as she lit up the net with 12 kills, putting down several big swings that were hard to defend.
It’s always fun to get the first Conference win of the season. 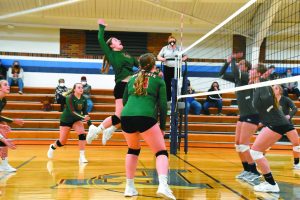 KCC BearcaT Senior Courtney Fredrickson goes up for a kill in KCC’s three-set win over the Northern Freeze last Monday night in the Tri-County gymnasium. Fredrickson had 2 kills, 5 digs and was 16/16 on serving. (Submitted Photo by Megan Larson) 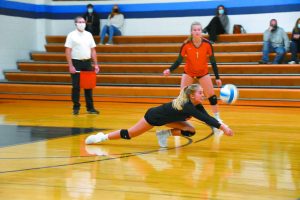 Bearcat sophomore player, Annika Johnson, playing libero for the Bearcats Junior Varsity team, goes for a dig during one of the two sets where the Bearcats defeated the Northern Freeze.
(Submitted Photo by Megan Larson)