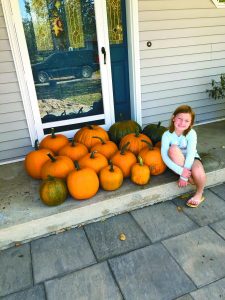 NICOLETTE GUBBELS, a first grader at Kittson Central School in Hallock, harvested 17 pumpkins she grew from two seeds she planted in kindergarten. Above, she poses with the pumpkins at her home

By Anna Jauhola
Last year’s kindergarten school project yielded 17 pumpkins for one Hallock family.
Six-year-old Nicolette Gubbels babied her seeds she received from her teacher, Shannon Christenson, at Kittson Central. She put them in soil in a section of egg carton, along with green bean and radish seeds, and watched them sprout last spring.
“I grew the pumpkin seeds in my grandpa’s garden,” Nicolette said. “Then when they got bigger, Grandma letted us put them in the garden.”
Her grandparents, Carol and Jerry Olsonawski, helped take care of the pumpkins in their fenced garden over the summer. Although Grandpa Jerry wasn’t excited about the plants – “Grandpa doesn’t like vines,” Nicolette said – Grandma Carol made the executive decision of allowing them.
As Nicolette and her mom, Karen, watched the pumpkins grow, they noted the plant could have produced more than the 17 pumpkins they harvested recently. The pumpkin vines overtook the beans and radishes they planted.
“Miss Shannon gave us two radish seeds, two pumpkin seeds and two green bean seeds,” Karen said. “We did get one radish and a few green beans, but the pumpkins choked them out.”
“Ick. Radishes are too spicy,” Nicolette said.
Karen said at one point, there were so many pumpkins, one escaped the fencing and grew in the Olsonawski’s yard. Amazingly, the deer that wander through Hallock didn’t find these pumpkins and that one survived. However, a few others fell off or just didn’t grow.
Nicolette said she had fun growing the pumpkins and she loves the big, yellow flowers that grow first.
“She was definitely listening to Miss Shannon on how to do it,” Karen said of her daughter’s success in planting the pumpkins.
Nicolette has given three pumpkins to her cousins and will carve the rest with her family as Halloween approaches. She said they will carve happy and scary faces, and put candles inside so people can see the pumpkins at night. If you’re on North Douglas Avenue in Hallock over the next week, look for Nicolette’s pumpkins.