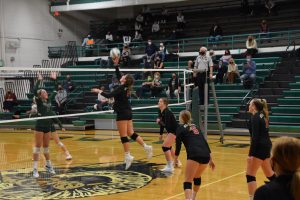 KCC’s Cheyenne Scalese goes up for a kill during the KCC Bearcats’ match versus Roseau. The Bearcats lost to the Rams in four sets, winning only the second set. Scalese contributed 10 kills for the Bearcats. (Submitted Photo)

By Coach Tina Turn
The Kittson County Central fall sports teams had paused their activity for a two-week period with the hopes of lowering the Covid-19 numbers in the school communities. On, Monday, Nov. 2, the football and volleyball teams were given the nod to start practicing, and on Thursday, Nov. 5, the volleyball team played in only their third match of the season when they traveled to Roseau to take on the Rams.
We always have heated battles with the Rams and this year was no different. The match went to four sets and was comprised of long rallies and a fight for every point. Junior middle hitter, Cheyanne Scalese, set the tone for the Bearcats in set one as she led the way offensively with 6 of her 10 kills in the opening set. Jenna Davis followed with 3 kills while McKenna Peterson added in a single. It took a while for the Bearcats to find a groove and it wasn’t until late in the game when there was too much time to make up so they lost set one 16-25.
In set two, the Bearcats quickly hit the stride they were on at the end of set one. There was a balanced attack across the net with five players contributing to the 9 kills in the second set. Scalese made her presence known on defense with a solo block while seniors Gracie Whitlock and Courtney Fredrickson joined forces for a block as well. Jenna Davis picked up 3 digs in the 25-17 win by the Bearcats.
Set three was a back-and-forth battle between the two teams on defense. The Bearcats logged a very high 15 digs in a set where every point was a battle. Blockers didn’t put any checks in the points column in set two, but they had lots of block put-backs to keep the Rams on their toes. At the end of the set, however, the Bearcats lost their legs a little and came up short 21-25.
KCC was down 4-12 early on in the fourth set, but they clawed their way back to make it a 2-point game for a 23-25 loss. McKenna Peterson saved the majority of her offensive power for this set clocking half of her 8 kills in one set. Scalese added another block and a half in the effort, while Whitlock and Fredrickson teamed up for another block as well.
We enjoyed being challenged coming right of our pause as the Roseau game is always a fun one for the kids to play in. However, there was no doubt at all that conditioning was an issue after the break, and how could it not be? Even though we did Zoom workouts the entire time we were on pause, it’s just not the same thing. It would be fun to have a re-match when the girls have their legs back under them again. Nevertheless, they played with heart and did the best they could given the circumstances. There were some seriously long rallies and the defense did a good job making reads and adjustments to a fast-paced Roseau offense. Ultimately, the Bearcats were happy to be back on the floor and they are hungry for more competition.