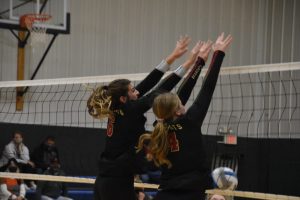 KCC Bearcat teammates Cheyanne Scalese AND GRACIE WHITLOCK prepared to block a hit by the Badger-Greenbush-Middle River Gators. The Bearcats defeated the team in three sets, 25-22, 25-20 and 25-21.
(Submitted Photo)

By Coach Tina Turn
The Kittson County Central volleyball team played in their final match of the season on Thursday, Nov. 19 at home in Lancaster where they took on the Gators of BGMR. The team didn’t know it would be their last game until Wednesday when a new executive order went into place. In a season that already had been a rollercoaster ride, this final game would be a true test of the players’ resiliency.
The Bearcats announced their fighting and determined presence early on by bringing joy to the gym by celebrating each point with enthusiasm. Senior McKenna Peterson pounded out her aggressions with an impressive seven kills in the set. Junior middle hitter, Cheyanne Scalese, dominated the net with two morally defeating solo blocks and many other block put-backs. The Bearcats also served perfectly in the opening set to help set the focused tone for the rest of the night. There were some long rallies in the set, but as the Gators were attempting to make a comeback late in the set, Scalese stifled their efforts with a huge block to end the game 25-22.
Set two proved to be another consistent, solid, and joyful effort on the part of all Bearcat players. Senior setter Gracie Whitlock, in addition to her 29 assists on the night, added in three of her five kills in set two to let the Gators know she is an offensive threat in her own right. Scalese added three kills, followed by Courtney Fredrickson and Peterson with two each; Jenna Davis added in a single, but it was Peterson’s cross-court slam from the outside that ended the set 25-20.
After a few struggles on serve receive, the Bearcats found themselves behind for the first time of the night. Down 7-12, the Bearcats’ timeout helped the players to re-focus and fight through their fatigue. KCC steadily climbed out of the hole to make a fantastic comeback, aided by 12 kills from four different players. Smart serving helped keep the Gators out of system, and as the free balls came over the net, the Bearcats were able to set it up and execute their way to a 25-21 come-from-behind win for the sweep.
This match was important for a few reasons. The Gators and the Bearcats were both undefeated in Northern Lights Conference play coming into the match and it was Parents Night and Senior Night. Additionally, there was the added pressure of it being the final match of the season, and everyone wants to end on a win, but for the seniors coming into this night, there were a ton of emotions. Fredrickson, Peterson, and Whitlock channeled their emotions in a fantastic way, seizing this last opportunity to play the game they love with joy and passion, thus leading their teammates in a way that a concerted team effort led to a triumphant victory.
Our lofty goal for each set is to earn 15 of our points, knowing that we’ll gain some of the other points through opponent errors, but if a team can earn 15 of their own points, it generally indicates that the set was played very well. KCC earned over 15 points in each of the three sets, surpassing their goal. They surpassed another of their match goals by serving 95% with 7 aces. It was a bittersweet night, and the community can be proud of their Bearcat student-athletes. They did show resiliency and proved that there is a lot of joy to be found in the journey even when confronted with disappointing challenges.
The Bearcat volleyball team ended their season with a 5-1 record and a conference record of 4-0 making them the  Northern Lights Conference Champs.