By Anna Jauhola
Even though winter changes the landscape by removing leaves and making things look barren, the construction at Hallock’s dam has drastically altered the well-known recreation area.
Houston Engineering is in charge of the $2 million project, which began earlier this fall. Spruce Valley Corporation of Middle River is the main contractor.
So far, the bridge above the dam has been removed and concrete has been cast to replace the stop logs that once helped regulate flow. This made way for construction workers to build the abutments for the new bridge.
“Things are going really well with the bridge,” said Jeff Langan, Houston Engineering. “It appears the contractor intends to set the beams in December. The bridge deck and approaches will be (placed) after spring runoff next year with the bridge scheduled to be open to golf course traffic mid-May.”
Currently, to keep the bridge area dry for the cement abutments to cure, the contractors have large pumps placed around the structure to move water from above the dam to below.
Anyone who observes the area during construction will likely notice the high banks are mostly devoid of trees. Langan said trees were removed and many of the large boulders of varying sizes that have been stockpiled by the river have been embedded in the banks.
“There’s no question trees provide bank stability and we like to keep them growing on river banks,” Langan said. “But we embedded the rock in the bank so the water would wash around the rocks when the flood comes. Water tends to scour around things on top of the bank, even trees.”
Many of the boulders have also been placed for the first rock riffle fishway. These fishways are meant to provide a gentle slope for fish to move more easily both up and downstream.
“Spruce Valley has done these types of projects in the past so it’s made it really helpful,” Langan said. “It’s a somewhat specialized type of construction. Whenever you’re dealing with natural channel work, it’s fairly specialized to get this thing to function the way you intend it to.”
Contractors will likely finish any other rock work, such as the fishway that will go under the new bridge, before setting any beams for the bridge. That way, they don’t have to work under the beams.
Langan added the contractor plans to work on the main fish rockway, which will run from quite a ways upstream, under the bridge and down toward the first rock riffle. This rockway will have a gentle slope of about a 3 percent grade, allowing for easy kayaking or canoeing through the area. Langan said there will be approximately 5 feet of clearance between the water and the bottom of the bridge beams during high flow times.
Although this project is meant to provide more recreation for the area, the public should bear in mind the Two Rivers has high flow and low flow periods. During low flows, canoeing and kayaking won’t be as accessible.
However, the fishing should be improved with better pool depths and more fish moving throughout the river.
The construction is set to continue well into 2021. 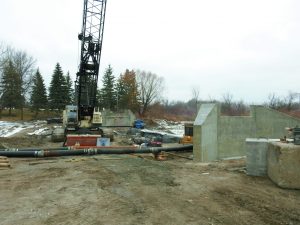 Contractors have completed the abutments for the new bridge that will span the main rock fishway. The beams for the bridge won’t be set until December after the concrete is done curing. In the meantime, contractors will work on the fishway below the bridge.