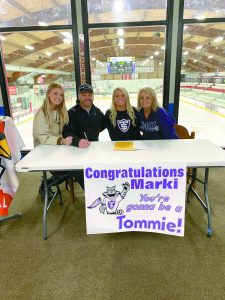 ASHTON, JEFF, MARKI AND DAWN OBERG celebrate Marki signing on as a Tommie to play DI hockey with University of St. Thomas.

By Anna Jauhola
When Marki Oberg and Tom Palkowski met to discuss her desire to play hockey for the University of St. Thomas, they couldn’t believe how the stars had aligned.
Marki – a senior at Alexandria Area High School – along with her mother Dawn Lindegard Oberg, met Coach Palkowski on a campus visit and had lunch. When they mentioned Dawn is from Hallock, Palkowski immediately asked if they knew Mark Nordling.
“Dawn pretty much started to tear up,” Palkowski said. “She started to tell me the connection and how it all played out. Of course, I got a little emotional as well, but it was pretty cool.”
Nordling was Dawn’s uncle, and one of two Marks for whom Marki was named.
Palkowski and Nordling played on the University of Illinois Chicago hockey team their freshman year of college. Nordling was No. 22 and Palkowski was No. 23, so they knew each other well.
“We had that Minnesota connection, being away at college. So we probably drifted toward each other because of that,” Palkowski said. “We got dressed next to each other every day. You get to know people in the locker room closest to you.”
Sadly, at the end of the first semester that year, Nordling suffered a medical issue on the ice and died at the rink. Palkowski remembers the day, noting he and other teammates arrived at the rink to find an ambulance out front only to realize later it was there for their teammate and friend.
Little did he know, decades later, Palkowsi would meet a young woman named Marki with a talent for his friend’s favorite game as well as a personal connection.
“It was ironic when they mentioned Dawn was from Hallock,” Palkowski said. “Instantly, when I hear Hallock, I automatically think of Mark.”
Marki was just as blown away by the incident, stating the story really touched her heart.
“It really felt like this is the place for me,” Marki said. “Like, if this isn’t a bigger sign from God, I don’t know what else is. It was crazy.”
Marki’s Hallock hockey connection doesn’t stop there. Hockey runs deep in Marki’s family.
Her great-grandfather was Hallock native Jerry Lindegard, a legendary Minnesota Gophers hockey player.
Marki has been determined to play college hockey since she was very young, which led her to focus on it pretty hard. Whenever she visited her Grandpa Jerry, Marki said he told her the same thing.
“He’d say, ‘Don’t take hockey so seriously, Marki. You have a life,’” she said. “‘All you’re doing is hockey, hockey, hockey, hockey. It sounds just like me.’”
His biggest advice to Marki regarding hockey was to have fun.
“He’d check in and ask if I was having fun, and I’d say, ‘Of course I am!’ He was always checking in on me. Grandpa Jerry was a great man,” she said.
Throughout her hockey journey, Marki said she has had support from all her family, including those still in Hallock. Generations of Lindegards and Nordlings have played and are still playing hockey. So, when she recently sealed her dream of playing hockey for University of St. Thomas, her phone exploded with texts, phone calls and FaceTime calls full of congratulations.
To top it off, she will also play Division 1 hockey as University of St. Thomas was recently granted permission to switch from Division 3.
“It made me feel like everything I’ve done to work up to this is totally worth it,” she said. “I put everything toward it. I prayed a lot – I can give it to him too. But it helped me accomplish my goal and now, here I am.”
Marki signed her national letter of intent recently and is excited to become a leader on and off the ice for the Tommies. Her strengths include pushing other people to achieve their best, whether that be on the ice or in life.
“I feel like being a leader is just in my personality,” she said. “It doesn’t matter if I have a C or an A on my jersey. I will still lead in my own way.”
Palkowski agreed Marki’s leadership skills are a big part of how she will impact the Tommies team in the 2021-22 season. She has an easy-going demeanor, he said, and a bubbly personality, but also “she brings a little edge and speed to her game.” After her campus visit, Palkowski began watching Marki play for Alexandria and actively recruited her for University of St. Thomas.
“I think she will lead by example, and she’ll just be a good teammate,” Palkowski said. “She definitely has those qualities and personality. You can just envision certain kids being leaders. She certainly falls into that category.”
Marki feels the same about Palkowski saying he is the biggest reason she signed with University of St. Thomas.
“When I sat with him, just hearing about how he runs his team and how he views the game of hockey, it just touched my heart,” she said. “He doesn’t just know what he’s doing as a coach, he knows what he’s doing as a person. I see just a great person in him and that’s someone I’d want to know the rest of my life.” 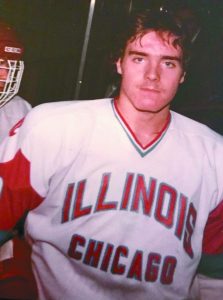 Mark Nordling in his University of Illinois Chicago hockey jersey. 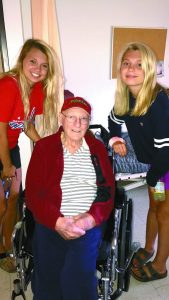