By Mark Johnson, coach
KCC 53 – Warroad 23
At the Williams Arena Pavilion on March 12 of last season, the Bearcats basketball team watched the first round of the state basketball tournament and received the news that the tournament would be halted. Now, 288 days later, give or take a day, we were able to get back on the floor and compete with and against each other. It is good for our students and our communities. Now we just need to make sure we do our part to follow the recommended protocols that will give the students the best opportunity to experience an uninterrupted season.
Obviously, nothing is guaranteed, but why wouldn’t we do everything we possibly could to achieve that outcome?
The start to the season looked like it might get delayed for weather reasons last Thursday, but the storm front fizzled and provided safe travels for the trip to Warroad.  As is often the case in the first contest of a season, the flow of the game was a bit discombobulated.
The Bearcats were able to put together solid stretches of play throughout the first half that helped them build a lead, but those stretches were interrupted by turnovers and defensive mistakes that gave the Warriors a chance to trim into the Bearcats lead. KCC played well enough in the first half though to hold a 36-11 halftime advantage that was built largely on the back of an offensive mindset of attacking the basket for layups and possible free throw attempts. In fact, KCC converted on 8 free throws in the first half to aid in their offensive attack.
The second half allowed the Bearcats to continue to work on defensive principles and awareness.  As the game progressed, the Bearcats defenders started to communicate better with each other and recognized their responsibilities in a timelier fashion. The second half also allowed for the entire roster to enter the game and gain some valuable experience.
KCC finished the night with a 53-23 win and started the season on a positive note.
The girls did a good job of trying to implement what we want to do as a team. Without question, we have work to do to become more polished and consistent, but that is what the rest of the season allows us to do. All in all, it was a good start.
Scoring leaders:  Gracie Whitlock 15, Jenna Davis 10, Cheyanne Scalese 10, Courtney Fredrickson 5, Silver Kraska 4, Emma Sjostrand 3, Morgan Turn Alyssa Wiese and Siri Stenmark 2 apiece.
Rebound leaders: Whitlock 14, Fredrickson 7, Davis 5
Assist leaders: Davis 9, Elsa Steen 3 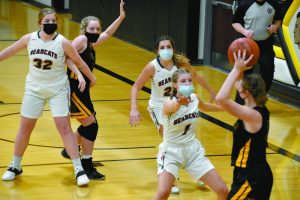 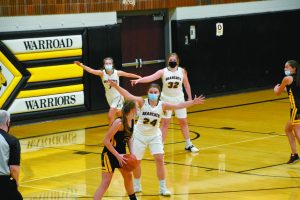