By Kris Folland, coach
KCC 20 vs. RLCC 57
The Bearcat boys basketball traveled Red Lake Falls to take on the Red Lake County Mustangs on Tuesday, Jan. 19.
The junior varsity started its game out fairly competitive but was quickly out-paced by the Mustangs on both ends of the court. It was clear the Mustangs players picked up a basketball prior to the Jan. 4 season as they handled the ball well, hit shots from all areas and controlled the game from beginning to end.
The Bearcats were down at halftime by a score of 37-16 and lost the game 57-20. There was no defensive player of the game selected for the Bearcats.
Scoring leader was Chisum Schmiedeberg with 10, followed by Kaden Vig with 4, and Austad, Folland and Warnke each adding 2 points.
The varsity game felt better in some areas, but the result was the same.
Sophomore Chisum Schmiedeberg started the game well on both sides of the ball with strong defense on top and keeping the ball moving on offense. Junior Evan Austad found a nice groove and scored throughout the game. While the offense was average at best, the Bearcats defense had no answer for the Mustangs’ ball handling, ball screen and accurate shooting. Halftime found the Bearcats down 46-16 and the second half had the same pace with the Bearcats losing 76-34.
Turnovers continued to plague the Bearcats and simple communication on defense was lacking. Give the Mustangs credit as all the players on the team handled the ball well, communicated and scored form various areas on the court.
Bearcats scoring were Austad – 14, Faken – 8, Vig – 8, Schmiedeberg – 2, and Ristad – 2. Defensive player of the game was Schmiedeberg.

KCC 49 vs. SAC Storm 52
The Bearcats traveled to Stephen to take on the Storm for the third away game in a row.
The junior high boys played a competitive game for about three quarters of the game. The end of the game fell apart on poor defense and an aggressive Storm offense. Final score was a loss for the Bearcats 36-16.
Scoring for the Bearcats were Ty Vig – 10, Brody Scalese – 4, and Brock Scalese – 2.
Junior varsity was a competitive game throughout. Early inside offense by Vig and Folland put points on the board and aggressive drives and shooting by Schmiedeberg kept the Bearcats in the game with the Storm leading 30-24. The second half the Bearcats play the next round of varsity players who closed the gap again and were tied toward the end of the game. The Storm scored the go ahead basket and the Bearcats had the ball down 3 with under a minute left in the game. After a timeout and plan to take the ball inside the Bearcats spent the last few seconds of the game passing the ball around the top of the key and ended with a loss to the Storm 52-49.
Defensive player of the game for the Bearcats was Brandon Ristad who also had a strong half of rebounds and led the Bearcats in scoring with 11.
Also scoring were Folland – 8, Schmiedeberg – 8, Vig – 8, Austad – 7, Faken – 6, and Ter Wee – 1.
This is the third game of the season and second conference game for the varsity. The game started out with both teams trading baskets. Schmiedeberg once again started strong on defense and offense with high energy on both ends and 6 points by half time. The Bearcats had missed opportunities early on with some good  post ups and chances to drive but either the pass wasn’t made or was too late and resulted in a turnover.
The Storm simply out-hustled the Bearcats throughout giving some lessons on fast breaks, euro-step and simple drives to the basket. The Storm also shot well but it was the quick drives and slashes to the basket that ran up the score.
At halftime the Bearcats were already down by a score of 35-13. The second half was identical to the first. The Storm kept taking defensive rebounds down for quick scores and the Bearcats continued to struggle on defense stopping the ball and often lost their opponent. The Bearcats also lost some energy at the end of the game and the Storm kept applying the pressure.
Final score saw a Bearcats loss of 68-25.  Individually the Bearcats do well in some areas but collectively there is still too many gaps, missed opportunities and missed communication. Oliver Ter Wee contributed throughout the game offering 1 minute substitutions of rest for our six regular varsity players.
Folland pulled in a team high 10 rebounds and earned Bearcats defensive player of the game for strong defense inside and on the wing.
Scoring for the Bearcats were Austad – 9, Schmiedeberg – 6, Faken – 5, Folland – 5. 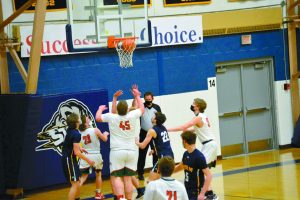 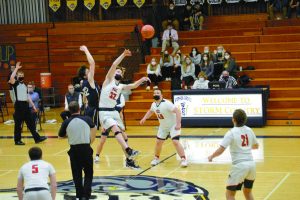 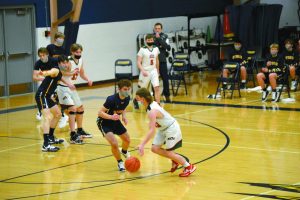 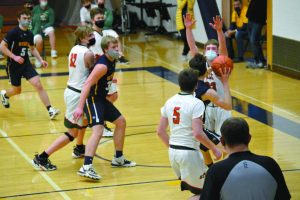 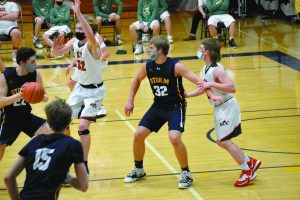