By Mark Johnson, coach
KCC 52 – SAC 62
The Bearcats hosted the Stephen-Argyle Storm Monday, Jan. 18 in Hallock at the Kittson Central gym.  It was an early season matchup that provided a good measuring stick for both teams as to how they stack up against strong competition.
The two teams played each other even through the opening minutes of the first half. KCC held an 8-7 lead, when the Storm put together an 11-0 run to take an 18-8 lead. It was that stretch of the game, during which the Storm converted on 5 straight possessions that provided the working margin SAC needed to hold on through the remainder of the contest.
The Bearcats chipped away at the Storm lead and at one point in the second half had cut the Storm advantage to 5 points at 53-48. It got no closer than that as the Storm held off the Bearcats and got out of town with a 62-52 victory.
“It was a good game for us to find out where we stand. The Storm is a solid team that will probably be at the top of the standings come the end of the season.  It is the same place we see ourselves standing at the end of the season. We did a number of things well and we got a good look at what we need to do better.  Bottom line is, our girls worked their tails off throughout the contest, and with each minute of play gained invaluable experience in tightly contested situations.”
Scoring leaders:  Courtney Fredrickson 17, Gracie Whitlock 15, Cheyanne Scalese 11, Emma Sjostrand 3, Morgan Turn, Aidra Johnson and Elsa Steen 2 apiece.
Rebound leaders: Whitlock 11, Fredrickson 8
Assist leaders: Jenna Davis 14

KCC 65 – BGMR 60
The Bearcats hit the road Thursday, Jan. 21 to make the trek to Greenbush to battle the BGMR Gators. The Gators are one of the teams everyone has their eyes on as an early-season favorite in Section 8. They are athletic and relentless and will force you to compete for the full 36 minutes of the game if you want to survive.  KCC did just that.
The Bearcats opened the game in strong fashion and got off to an early 5-0 lead.  The Gators’ full-court pressure, while intense, provided opportunities for KCC.  The Bearcats did a good job of spacing the floor against the pressure and once they moved the ball through the first line of the pressure, did a great job of attacking the basket and converting on the odd-man advantages. KCC relinquished the lead once in the first half at 8-9, but quickly recovered and slowly built the lead to as many as 9 points at 30-21 late in the first half of play.
The Gators trimmed that lead to 34-29 as the first half expired and both teams headed to the locker rooms to prepare for the second half.
The second half was a battle, as well. KCC held the lead through the early portions of the second half of play, but the Gators overtook them midway through at 43-40. The two teams traded leads back and forth and were locked at 53-53, when the Bearcats capitalized on a possession to take a 56-53 advantage. The Gators wouldn’t get any closer as the Bearcats got key defensive stops and combined them with free throws and layups to capture a hard fought and well-earned 65-60 win.
“The team did a great job. It is never easy to roll into that gym and play the Gators. Our girls were up to the task and then sum.  The key, early in the game was how well we handled and capitalized on their pressure and were able to turn it against them. The rest of the game was about grit and determination. We had a huge contribution from our bench on both ends of the floor. The games this week were great for us. We had baptism under fire and gained critical experience against two very good basketball teams. The good news is, we look like we have the makings of a very good team, as well.”
Scoring leaders: Morgan Turn 21, Cheyanne Scalese 16, Courtney Fredrickson 9, Ella Olson 6, Jenna Davis 5, Emma Sjostrand 4, Gracie Whitlock 3, Elsa Steen 1
Rebound leaders:   Whitlock 9, Davis  and Fredrickson 7 each.
Assist leaders: Davis 15 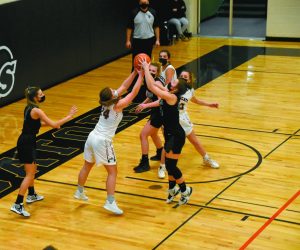 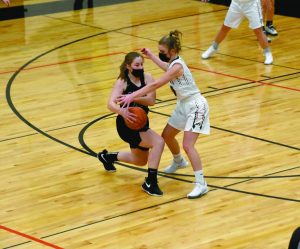 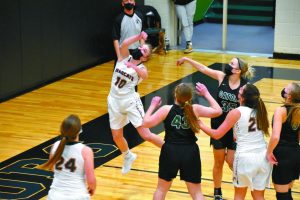 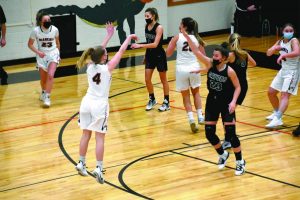