By Kris Folland, coach
KCC 46 — BGMR 88
The KCC Bearcats hosted the BGMR Gators in Lancaster on Tuesday, Feb. 2. The junior high game was one sided as they lost 16-36. Scoring for the Bearcats was Ty Vig-10, Body Scalese-4 and Brock Scalese-2. The Bearcats are hampered with some minor injuries and working on finding their identity and player rotation to get in the win column.
The Bearcats JV with their rotation of JV and varsity players started out slow. The Gators were strong and cruised to a 33-12 halftime lead. The second half was little better for the Bearcats but ended in a 32-49 loss. Scoring for the Bearcats was Knutson-7, Folland-6, Schmiedeberg-4, Vig-4, Austad-4, Faken-2, Gatheridge-2, Wiese-3.
The varsity has been looking for some traction, identity and consistent play. Winless on the season is not where we want to be and with the Gators being one of the top teams in the section, we knew it would be a tough game. The Bearcats came out of the gates hard and played great for 9 minutes. The game was close and we basically traded baskets by moving through the press break quickly and getting the ball in the hoop.
After a Gator timeout, the momentum quickly shifted. It’s been said if you can dodge a wrench you can dodge a ball, and that is what the Bearcats did. Controlling the ball on offense and being aggressive toward the ball on defense has been mostly absent this year for the Bearcats. Once again, costly turnovers allowing the Gators easy and  uncontested layups quickly ran the score to a half time spread of 50-20 Gators lead. Second half did not fair better as the Gators just kept rolling and their substitution players seemed to score as much as the starters. Final score was a loss for the Bearcats 46-88. Evan Austad had a nice game of shooting with 17 followed by Vig-12, Faken-9, Folland-6 and Ristad-2. The Gators had 10  players score in the game.

KCC 28 — WAO 82
The KCC Bearcats traveled to Warren on Thursday, Feb. 4 to take on the WAO Ponies in another conference game. The junior high game was fairly close but drifted away at the end and the Bearcats lost 23-37. Leady scorer for the Bearcats was Brody Scalese-9, Vig-6, Lunsetter-4, Brock Scalese-2, Nelson-2.
The JV game started with our varsity players having a nice first half and leading the Ponies 27-20. The second half was respectable for a while but ended with a Bearcats loss 33-46. Scoring for Bearcats was Austad-11, Vig-9, Knutson-6, Faken-4, Folland-2 and Schmiedeberg-1. The varsity game needs some sort of quote to summarize or motivate for the rest of the year.
“To give anything less than your best is to sacrifice the gift.” —long distance runner Steve Prefontaine.
This game may need a little introduction. The Ponies have struggled off and on the past few years in basketball taking some lumps along the way with younger players and a thin roster. This is a common theme for the Bearcats as every team we have played has come out swinging. We have seen a defensive press from beginning to end, aggressive play on the ball, and teams giving great effort to win. While we may be young, I expect the team to be learning from these lessons and see the effort both individuals and the teams are putting in against us during the game, throughout the week, and during the off season.
This game does not need many details as Ponies came out hard and took the ball to the basket almost every play. The Bearcats turnovers and laid back defensive play on the ball allowed the Ponies to cruise to final score win of 82-28. Scoring for the Bearcats was Schmiedeberg-8, Austad-6, Faken-6, Vig-4, Folland-2.
The Bearcats lost Sophomore Isaac Folland for four to six weeks with a broken bone and will be looking to our JV players to step up and help fill the void. Next week we look to regroup and refocus as we take on Clearbrook-Gonvick and Lake of the Woods, which are two teams that will definitely be looking to improve their seasons. 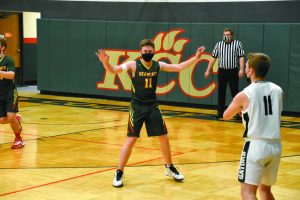