By Kris Folland, coach
KCC 44 — Freeze 70
The junior high boys played a mostly even game against the Northern Freeze on Tuesday, Feb. 16. The ending result was a loss 26-38. Scoring for the Bearcats was Brody Scalese-12, Ty Vig-6, Emmitt Lunsetter-5, Willie Nelson-3
The junior varsity lost 10-76 in a game that was never close from beginning to end. Scoring for Bearcats TJ Gatheridge-2, Dylon Warnke-2, Oliver Ter Wee-2, Brody Scalese-2, Ty Vig-2.
The Bearcats varsity came out strong and jumped to an early lead. Both teams traded baskets with the Bearcats grabbing the lead multiple times.
Chisum Schmiedeberg led the way with 7 first-half points and the entire team playing good defense. With the about six minutes left in the first half, the Freeze went ahead with some excellent inside baskets and never looked back. While the game remained competitive it ended in a loss 44-70 for the Bearcats. Scoring was led by Schmiedeberg-17, Vig-13, Austad-6, Knutson-5, Ristad-3.
KCC 48 — G/G 86
The junior high boys played an excellent and complete game against Grygla/Goodridge at Lancaster on both sides of the ball and won their game 37-23. The game was an even matchup making this a great win for the Bearcats. Leading scoring on his home court was Brody Scalese with 12, Vig-10, Lunsetter-10, Nelson-3, Cerkoniak-2.
The junior varsity game started out with the Chargers easily handling the Bearcats and at half time it was 44-5 in favor on the Chargers. Lunsetter led the Bearcats with first half scoring with 4. The Chargers played their second half players as they had a sizeable lead. There were two options for the Bearcats, either give up or keep playing. Seventh graders Brody Scalese and Brock Scalese made the most of their only half of JV and lit up the score board, attacking the basket and hitting many pull-up jump shots.
Scoring 20 points for the game was Brody Scalese followed by Brock Scalese-6, Lunsetter-4, Vig-1. The four underclassman each only played one half as they also play junior high. The end result was a 31-65 loss for the Bearcats but the second half aggressiveness shown by the Bearcats helped gather momentum going forward.
The varsity game summary is starting to sound like a broken record. Start the game strong, give up some easy baskets going into half time and take the second half off. The Chargers jumped to an early lead but the Bearcats quickly countered and grabbed the lead back throughout the first half. With aggressive shooting the scoring leaders in the first half were Austad and Vig with Knutson, Schmiedeberg and Ristad all chipping in some nice baskets.
The Chargers had a flurry of baskets and a nice end to the first half with about 10 unanswered points and led 41-30 at halftime.
The second half was a complete disaster as turnovers by the Bearcats led to many easy baskets and offensively the Bearcats quit shooting the ball. The game ended in a loss 48-86 for the Bearcats. Scoring was led by Austad-17, Vig-13, Ristad-6, Schmiedeberg-6, Knutson-6.
Babe Ruth said, “It’s hard to beat a person that never gives up.”
This will be the team motto for the rest of the season. The Bearcats have a week off and will face one of the top teams in the conference as they take on the SAC Storm next Friday.

Photos below by Jazlynn Folland 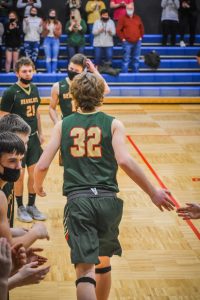 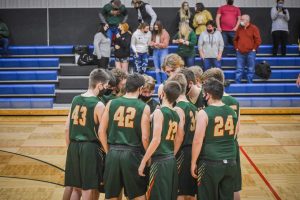 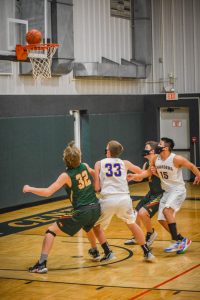 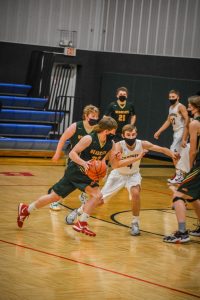