By Anna Jauhola
Last summer, several people in Teien Township west of Kennedy decided to make a bid to save the community’s town hall.
The former school building served as town hall for many years after the Teien Central School closed due to consolidation in 1952. It became unusable only a few years ago due to issues such as age and lack of heating. So in August of 2020, after visiting with the Teien Township Board, a committee formed to begin searching for funding to save the building.
“We were able to find an avenue to obtaining (Minnesota) Legacy (Grant) funds to help preserve and restore the building,” said Laura Bloomquist Hammond, who is on the committee.
Hammond lives in Teien Township and grew up there, having attended many 4-H meetings at the town hall.
The grant for $9,995 has enabled the township to hire Steve Martens, an architect historian, to evaluate the building and its cultural and historical significance to the community. They hope his expertise will lead to placing the building on the National Historic Register and provide more funding to restore it.
“He has a reputation for buildings he has successfully completed applications to have them placed on the National Historic Register,” Hammond said.
She said he was immediately excited about the project and tentatively plans to visit the site in April.
In a phone interview with the Enterprise, Martens said he’s made many friends in Kittson County over the years and has been drawn to the county’s history.
He was pleased when Hammond asked if he could assess the Teien Town Hall. He is interested in the county’s cultural history, specifically the Norwegian-American immigrants along the U.S.-Canadian border.
So he sent a proposal, which the Teien Township Board accepted, and he plans to be here mid- to late-April.
“We’ll try to make the best argument we can for the little school,” Martens said.
He’s been studying the plat maps of the township and is excited to begin documenting the location in the spring.
He will take photographs inside and outside of the building.
He’ll sketch a map drawing of it as well.
“They’re big on documentation that shows all the sides and interior of the building,” Martens said of the historical organizations. “So they can get an idea what the condition is. … But the really big part seems to be assessing the integrity of it – whether it’s near original condition. … This is probably our one-and-only chance to make the best argument.”
A few years ago, the township board had to repair the roof the building, during which they removed the bell and its structure, and set it in front of the building.
In conjunction with the building’s condition, the historical and cultural significance will play a vital role. The reviewers are big on context, Martens said.
He will be looking for any pictures, artifacts, written accounts and more regarding the building as a school and town hall.
Hammond said she and her brother and sister visited the building last fall where they found ballots still in the former voting booths and items left over from when the 4-H club met there. Now the township uses it to store road signs and flood control equipment.
“I want to find what we can say about the importance of that building to the neighbors, the Norwegian-American immigrants that settled in that township as a kind of feature that unified their culture,” Martens said. “While I’m up there, the more people I can talk to, the better. Anybody who has old photos or sometimes you’ll find people who saved programs from school.”
In his experience, Martens often finds it’s a challenge to find people to visit about the history of the building.
In this case, he has a great starting point in Marlys Nelson who is on the committee and not only attended the Teien Central School but has gathered written memories from several other students. Nelson’s family actually boarded one of the teachers who taught at the school, whom she remembers fondly.
Should the venture be successful to place the building on the National Historic Register, Hammond said the final purpose of the hall hasn’t been officially determined. However, they’ve thought of making it into a mini museum of the township’s history including the items important to the building as both a school and a township hall. But those are just ideas at this point.
“This is a chance to celebrate the importance of that thing your community is known for,” Martens said of the process. “And let the next generation know this is actually a pretty big deal in the big scheme of things. I just think it’s healthy when there is pride in local heritage.” 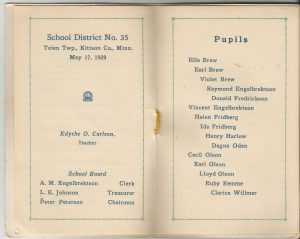 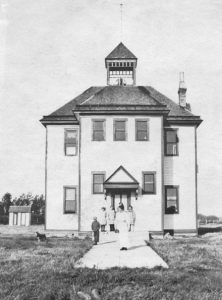