By Anna Jauhola
As spring begins to quickly transition into summer, people around Kittson County are working to beautify and maintain cemeteries. Many cemeteries are managed by volunteer groups or committees, while a few are still maintained by city personnel.
In Hallock, the Greenwood Cemetery Board has set its annual cleanup day for Tuesday, May 25 at 9 a.m. Board Member Sharlene Klegstad said this is the initial way the board gets the cemetery in order after a long winter. But then, throughout the summer months, the board hires a high school class and the students’ parents to maintain the location. The board pays toward the class’s fundraising efforts for their work, she said.
“Janet and Larry Olsonawski also do a lot to help keep it up,” Klegstad added.
The board keeps some mowers and weed whackers in its shed, but several people also bring their own lawn mowers and other tools for maintenance.
Sharon Peterson and Linda Boychuk also help by planting and maintaining a flower garden in the cemetery during the summer.
Greenwood Cemetery relies entirely on donations from individuals and other organizations to maintain the cemetery.
Riverside Cemetery in Lake Bronson is run by an association. Long-time, former secretary Connie Goldstrand said it operates solely on donations.
“People take a lot of pride in the cemetery,” she said. “We are lucky to have volunteers.”
At one time, the city of Lake Bronson handled the maintenance, but eventually it was turned over to the association.
The group now hires Bob Hogan to mow and maintain the location each year. Most recently, Hogan along with others built a shelter for a cemetery map so people can find graves more easily.
“Bob did the majority of the work,” Goldstrand said.
In Karlstad, there is a mix of who takes care of the Karlstad Cemetery. City Clerk Garnett Hanson said the city owns the cemetery grounds and the city maintenance person takes care of mowing and caring for structures on the land.
However, there is also a cemetery beautification committee that takes donations and most recently built a cemetery directory. Everett Englund is in charge of that committee, which started in 1988.

Over the years, the committee has been able to build the brick entrance pillars, purchase cement planters, plant trees, lift stones, install water lines and most recently build the director. While the city gets money from lots sold at the cemetery, the committee operates entirely on donations from the public.
The Kennedy Cemetery is run by a board of directors. Cecil “Butch” Fossell is the president and said they also care for the cemetery through donations. The board has its regular fund to pay Dean Mortenson to mow in the summer and for other upkeep, such as flowers, tree removal and planting, and repairing the water lines. The board also manages a perpetual care fund, which exists to ensure future care of the cemetery. Volunteers help with clean up and planting flowers each year.
In Lancaster, the Riverview Memorial Gardens is mostly overseen by its cemetery association, said Steven Sjostrand who is on the board. The city owns a portion of the cemetery, but the association maintains it and it operates solely on donations and the sale of plots. To help ensure future maintenance, the association not only has its regular bank account but also the Perpetual Cemetery Fund in the form of a certificate of deposit. Money is placed in the CD regularly and the association uses the interest to pay for mowing and other maintenance.
Sjostrand said most recently, Sheldon Carlson was the long-time caretaker of the cemetery. And in recent years, the local FCCLA group helped care for the location as a fundraiser.
The association also cares for the rural Sikar Cemetery.
They will hold an annual spring cleanup event sometime before Memorial Day.
“We have a lot of veterans out there, so that’s important to have the cemetery cleaned up before then,” Sjostrand said.
Aside from these volunteers and maintenance personnel, many people take great pride in caring for individual graves – from trimming to placing flowers on special occasions.
To give to any cemetery association or group, see the box featured in this article. The Kittson County Historical Center/Museum also carries the Kittson County Cemetery Directory. This book contains information about each cemetery in Kittson County, including how to find them, and contacts for who maintains those locations.

How to donate to Kittson County city cemeteries.
To learn more about other cemeteries throughout the county, call the Kittson County History Center/Museum in Lake Bronson at 218-754-4100 or email history@wiktel.com. 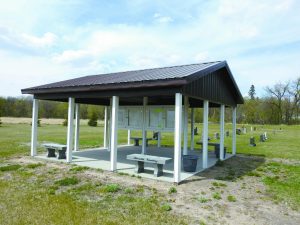 BOARDS OR COMMITTEES have worked to beautify, improve and maintain cemeteries across the county. Recently, the Riverside Cemetery Committee in Lake Bronson built this structure which houses a cemetery directory. (Enterprise photo by Anna Jauhola)