Season comments by Chad Kujava, coach
The KCC Baseball team ended the regular season with 9 wins and 5 losses.
The Bearcats won 6 Consecutive baseball games to end the regular season with wins over Ada, Fertile, Northern Freeze, LOW and 2 wins against Sacred Heart.
KCC play has been strong and that starts with good pitching from Izyk Strege, Frank Finney, Tyler Hennen and Adam Gustafson, who have all accumulated wins. The Bearcats’ aggressiveness and speed has been hard on its opponents.
They are currently 78 for 78 on steals this season and have put up really good hitting numbers resulting in averaging 7.8 runs a game. Frank Finney leads the team with 24 hits, Adam Gustafson 22 hits, Tyler Hennen 21 hits, Chisum Schmiedeberg and Izyk Strege17 hits.
The Bearcats defense has also been strong having far fewer errors than its opponents. KCC is especially strong at catcher with Carter Larson and Chisum Schmiedeberg throwing out a combined 10 base stealers and blocking a variety of pitches.
The outfield has been very successful as well with Tyler Hennen, Frank Finney, Ethan Hanson, Evan Austad and Braden Faken combining for 88 put outs. Isaac Folland leads the infield with 56 put outs, followed by shortstop and second basemen Izyk Strege and Adam Gustafson with 33 and 31 put outs respectively.

KCC 4 – RLF 1
Kittson County Central wins contest against Red Lake County Central/Red Lake Falls on Tuesday, June 1, 4-1
KCC got on the board in the second inning when Ethan Hanson singled on a 2-2 count, scoring one run.
Izyk Strege was the winning pitcher for the Bearcats. The pitcher surrendered 1 run on 5 hits over seven innings, striking out 8 and walking 1.
Kittson County Central saw the ball well, racking up 7 hits in the game. Adam Gustafson and Isaac Folland each had multiple hits for KCC. Folland and Gustafson each collected 2 hits to lead the Bearcats.
Red Lake County Central/Red Lake Falls was sure-handed and didn’t commit a single error. Brady Leuthner made the most plays with six.
This win secured the Bearcats a spot in the playoffs.

KCC 11 – A-B/NCW 6
Kittson County Central stole the lead late in the afternoon game in an 11-6 victory over Ada-Borup/Norman County West on Thursday, June 3.
The game was tied at 6 with the Bearcats batting in the top of the sixth when Adam Gustafson singled on a 1-0 count, scoring 1 run.
Ada-Borup/Norman County West scored 5 runs in the third inning, but KCC still managed to pull out the victory.
KCC got things started in the first inning. Tyler Hennen singled on a 1-2 count, scoring 2 runs.
In the bottom of the fifth inning, Ada-Borup/Norman County West tied things up at 6 when Austin McCraven’s sac fly scored 1 run for Ada-Borup/Norman County West.
Hennen got the win for Kittson County Central. The righthander went seven innings, allowing 6 runs on 9 hits and striking out 6.
Beau Jorgensen took the loss for Ada-Borup/Norman County West.
KCC racked up 14 hits. Hennen, Gustafson, Chisum Schmiedeberg, Braden Faken, Isaac Folland and Franklin Finney all managed multiple hits for the Bearcats.
Hennen went 3-for-4 at the plate to lead KCC in hits. KCC tore up the base paths, as two players stole at least 2 bases. Hennen led the way with 2.KCC 6 – NCE/U-H 0
Izyk Strege shut down Norman County East/Ulen-Hitterdal, throwing a complete game shutout and leading Kittson County Central to a 6-0 victory on Saturday, June 5. This win advanced the Bearcats to play against Win-E-Mac on Tuesday, June 8 at Bemidji State Universit.
KCC secured the victory thanks to 4 runs in the sixth inning. Ethan Hanson, Adam Gustafson, Franklin Finney and Tyler Hennen all contributed in the big inning with RBIs.
KCC got things moving in the second inning. Hanson’s sac fly scored 1 run for the Bearcats.
KCC notched 4 runs in the sixth inning. The big inning was thanks to singles by Gustafson and Hennen, a walk by Finney and an error on a ball put in play by Hanson.
Strege earned the victory on the mound for KCC. The righthander went seven innings, allowing zero runs on 2 hits and striking out 5.
Kittson County Central totaled 12 hits in the game. Strege and Hennen all managed multiple hits for the Bearcats. Strege led KCC with 4 hits in 5 at bats. The Bearcats didn’t commit a single error in the field. Isaac Folland had the most chances in the field with 6
Powered by Narrative Science and GameChanger Media. Copyright 2021.
All rights reserved.
Any reuse or republication of this story must include the preceding attribution. 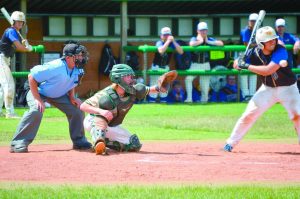 Bearcat Chisum Schmiedeberg was the catcher for the 6-0 win over the Titans. 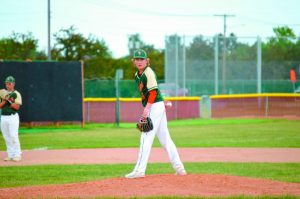