By Kristi Steen
The 18th Annual Jerry Wilson Memorial Run was held on Saturday, June 26, a day that would have been Jerry’s mom Lily’s birthday.
The Jerry Wilson Memorial Run is held in memory of Jerry Wilson, a Lancaster native, who ran marathons and trained others to run marathons, but who mostly encouraged people to live life to the full. He loved to see people of all ages, shapes and sizes out jogging, running or sprinting, setting new goals and smashing them! On our run day, we are often caught yelling two of his favorite catch phrases: “Way to go!” and “You’re way above average!”
It is with true joy that we honor him each year with this run.
Again this year, the majority of the proceeds will be given to the Lancaster Community. We have now completed the warming house and the ice rink, thanks to generous donors of time and money.
We now are working toward enough money to place playground equipment at the baseball diamonds. This play area will include a gate to keep children from running to the road and a net to cover the set from foul balls. How exciting! Miss the run but want to donate? Please contact Randy Nordin.
This year we were once again able to do a summer run as a part of Heritage Days and the weather was perfect. The clouds and breeze kept the temperature at bay until the run was complete. Numbers were a low, but enthusiasm was high. Pastor Galen Nordin started off the event with a beautiful prayer.
We had 57 running or walking the 5K, seven running in the 10K and a number of kids in the kids’ run. Next year, push yourself to be ready to participate! As Jerry always said, “Anyone can run. If you can run 3, you can run 6. If you can run 6, you can run 12.” (You get the idea!) Each young runner received a coupon for a cone, donated by Foxy Roxy. Thanks Roxy! 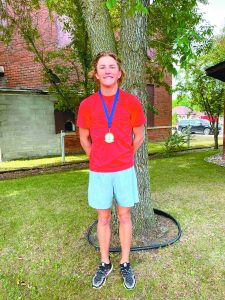 Izyk Strege was the overall 10K winner of the Jerry Wilson Memorial Run and the only runner in the 0-18 category. He finished with a time of 50:30. 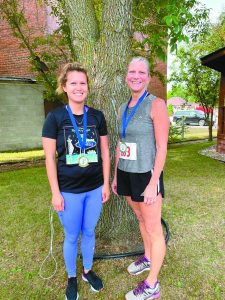 Mallory Hohensee was the overall 10K winner of the 18th annual Jerry Wilson Memorial Run with a time of 59:57 in the women’s division. Second place in the 19 and over category was Naomi Younggren with a time of 1:01:21. The race was held Saturday, June 26 during Lancaster Heritage Days. 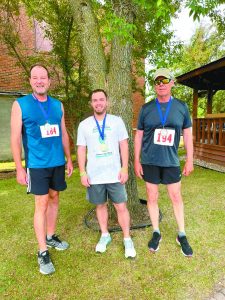