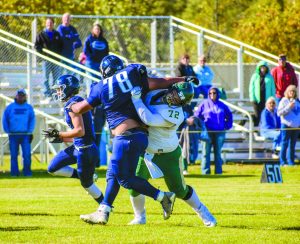 Isaac Folland, #72 for the Bearcats, tackles a Northern Freeze player during the Bearcats 33-0 win on Friday, Sept. 17. (Photo by Jazlynn Folland)

By Mark Bernstrom, assistant coach
On Friday afternoon, Sept. 17, the KCC football team traveled to Newfolden to take on the Northern Freeze in a conference game. The Bearcats were coming off their first win of the season and were looking to make it two in row.
KCC played a complete game with a strong showing offensively and defensively.
In the first quarter, the defense stood strong on the opening drive and forced the Freeze to punt. Then KCC put together a drive with strong running from Ozzie Meyer-Rice that was capped off with a 4-yard touchdown run by Frank Finney.
The 2-point conversion by KCC was good with a successful run attempt by Finney. The first quarter ended with KCC up 8-0.
In the second quarter, it was much of the same for the Bearcats. The defense was keeping the Freeze from getting within the red zone and forcing punts. The offense kept moving the ball and was able to find the end zone again on a 14-yard run by Chisum Schmiedeberg.
The 2-point conversion failed.
At the end of the first half KCC put together a drive to try and get some points before half time, but was unable to capitalize. Bearcats took a 14-0 lead going into halftime.
KCC received the ball in the second half, and of the first play from scrimmage Finney ran 62 yards for another Bearcat touchdown. KCC failed to make the 2-point conversion, but had a 20-0 lead early in the third. The offense striked again in the third with a 1-yard run by Braden Faken for the score.
After a successful extra point kick by Isaac Folland the score was stretched to 27-0. That is where the score stood after the third quarter.
The Bearcats scored again early in the fourth quarter with a 32-yard run by Schmiedeberg to cap off the scoring for the day with 33 points.
In the fourth quarter, the starters were getting subbed out and the sophomores and freshmen were able to get some playing time in. The underclassmen were able to keep the shutout intact and run out the clock at the end of the game. It is a good feeling to get all players on the field and for them to have some success. Final score 33-0.
Next game is Friday, Sept. 24 at 3:30 p.m. in Lancaster against Lake of the Woods. 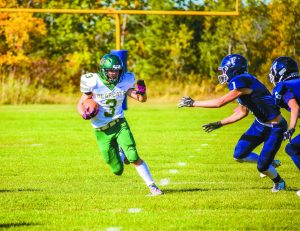 BEARCATS #3 FRANK FINNEY fends off a Northern Freeze opponent in the Friday, Sept. 17 game in Newfolden. The Bearcats won the game 33-0, with Finney contributing 2 touchdowns. (Photo by Jazlynn Folland) 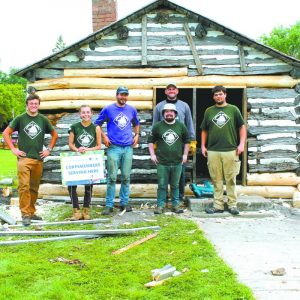