By Coach Tina Turn
KCC at LOW
On Monday, Oct. 18, the Bearcat volleyball team made the trek to Baudette to take on the Lake of the Woods Bears in the final regular season match. The two teams met up in the Class A Showcase tournament in Burnsville in September. That match went to three sets, and the Bearcats came out on top. KCC currently sits in second place in the west half of the section while LOW sits in third place, so this game is important for both teams.
Set one got off to a rocky start. The Bears’ serving was tough right out of the gates, which seemed to stun a tired-looking Bearcat team. Energy was just so low and the Bearcats served 10 for 14 in an error-riddled set that went to the Bears easily 25-14.
In set two, both teams went on runs and swapped the lead a few times, but 100 percent serving for KCC, including 6 aces, helped to keep the team on track. Senior Megan Larson led the team offensively with 3 kills while Cheyanne Scalese slammed down a solo block to assert some authority at the net defensively. It was Emma Sjostrand’s ace that earned her team point 25 for a 25-23 win.
The Bearcats enjoyed a comfortable lead midway through set three when a tough LOW server hit our receive hard, and we bungled about half a dozen passes to allow the Bears to catch up. Scalese hit hard at the net and helped her team to 5 points off kills. A timeout was taken when KCC was down 23-24, which served to ice the LOW server who missed long and granted the Bearcats a shot at the line, but that missed serve proved to be the last error of the set for the Bears as they nabbed the extra points win 26-24.
In the opening half of set four, the Cats settled into a good rhythm and didn’t allow the Bears to go on any runs. KCC held a sizable 14-8 lead when the Bears called a timeout. A sideout by LOW triggered a 6-point run by another strong Bear server. The Bearcats held the lead, but you could feel the tides turning near the end of the game when each server kept playing cat and mouse with our passers. Ultimately, the fourth set went to LOW 25-19.
Hats off to the Bears. No team has served that tough at us all season, and their success at the line prevented us from running our usual offense. It’s an unfortunate thing to have happen in any game, but it does show us how much work we need to put into our serve receive practice in the postseason, and that can be a good thing in preparing us for some upcoming tough competition. We end our regular season record with 19 wins and 9 losses. Overall serving for the night was 90 percent with 10 aces. 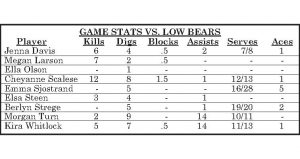