By Anna Jauhola
Anyone who wants to purchase the former port of entry building at Noyes is now looking at a $10,000 higher price tag.
At the regular Kittson County Commission meeting on Tuesday, Nov. 2, the commissioners approved a re-evaluated minimum price for the building at $30,000.
“I was able to go out there with Darrel (Johnson) a couple weeks ago. Seeing what we’re trying to do with electricity, the generator alone is worth well over $20,000,” said Brian Buhmann, county administrator. “Darrel has also been doing some lawn maintenance to make it look nice. I would recommend bumping up that minimum bid to $30,000.”
The building, built in the 1930s, has been closed as a port of entry since the mid 2000s. Since then, it went through a couple of owners and sat empty the whole time. It became a tax-forfeited property and the county’s problem in 2020. The building is in Commissioner Darrel Johnson’s district and he has been maintaining the building since. Because it did not have electricity, the basement was full of water, which he pumped out using a generator.
The county had the building sold earlier this summer, but the buyer did not follow through with payment. So, it’s back in the hands of the county. To keep the building in decent condition, the county had an electric box installed on a pole outside so Johnson could run extension cords to the sump pumps in the basement.
“Do you think we’re going to sell it for $30,000?” asked Commissioner Leon Olson, noting there could be room for negotiation. “If we can get rid of it for $20,000, maybe we should get rid of it.”
Buhmann and Johnson both said the improvements make it worth more, plus leaving it open for negotiation, bidders might just try to underbid.
Olson initially made a motion to set the minimum bid price at $30,000 with room for negotiation. After discussion, Olson rescinded his motion and remotioned to set the minimum bid price at $30,000, which the board approved.
The board also approved a motion for Johnson and Buhmann to work together on how to sell the property. They discussed three options – placing it with an auction company for an online auction; having Buhmann act as auctioneer; or handle it like any county-owned land sale and accepting bids from interested parties.
In other business, the board:
• Heard from Buhmann how the contract with Marco is progressing for IT services. In August, the board approved hiring Marco for the job and was under the impression the company would begin immediately in September. Instead, the actual contract didn’t start until Oct. 28. “Nobody has been here yet,” Buhmann said last week. “They’ve done most of (their work) remotely. So the first time we’ll see someone here on the ground will be this Thursday, Nov. 4. … In their defense, they said they wanted to wait until they had coverage under everything before they put in the backup battery and hard drive because then it’s covered under the contract.”
• Approved hiring Patrick Sobolik as the new motor grader operator for Karlstad. He begins Monday, Nov. 22 at $21.61 an hour.
Continued on page 4
• Approved a new lease agreement between the county and the Minnesota Department of Vehicle Services and Department of Public Safety. The departments will rent the same 3,500 square foot space as before to conduct written drivers tests. The lease begins Jan. 1, 2022, and ends June 2025. They will lease the space for $125 a day. The state will continue to send drivers examiners to the Hallock location on the second Tuesday of each month.
• Approved appointing Cody Schmalz to the board of managers for the Roseau River Watershed District. A small stretch of the Roseau River runs through the very northeast corner of Kittson County.

‘It’s a disease of the unvaccinated’ 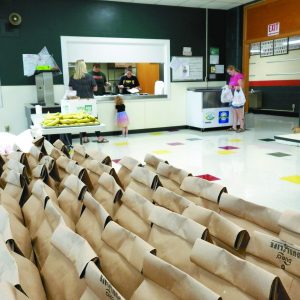