By Anna Jauhola
Long-time regional meteorologist Daryl Ritchison was the main speaker at Kittson County’s 2022 Crop Improvement Day. Appropriately enough, for a January event, Ritchison fought the weather during the first half of his trip to Lancaster on Thursday, Jan. 27.
“Did I tell you guys I drove 35 mph for the first 75 miles of my trip up here?” he said to a laughing crowd, which filled the Lancaster Community Center.
Ritchison is the director of the North Dakota Agricultural Weather Network (NDAWN), a weather risk management tool, which operates in conjunction with North Dakota State University. NDAWN has 172 weather stations around North Dakota and western Minnesota, including one at Humboldt and one at Kennedy. These stations measure wind at 10 feet, gather moisture content information and even soil water content. Ritchison said his organization uses all this information to create tools for the agriculture industry, particularly farmers.
“For example, our wheat scab model we have shows evaporation potential, when you need to apply fungicide,” he said, noting the information gathered at NDAWN stations helped build that model.
Each of the NDAWN stations covers a 20-mile radius, giving the organization the most complete weather collecting coverage. Those statistics are housed on three sites: ndawn.ndsu.nodak.edu; ndawn.info; and cloud.ndawn.org.
Currently, Ritchison is working with a group from Ottertail County to develop a soybean white mold model. That location isn’t covered at all by an NDAWN station, so the group raised the money needed and Ritchison will be setting up a station there. This will help them gather data pertinent to handling white mold.
When he met with this group in June 2021, he noticed farmers in the surrounding soybean fields spraying fungicide — it was 85 degrees with 25 percent relative humidity.
“It’s going to continue to be dry and they’re completely wasting money,” Ritchison said. “I did rough calculations and in that week, they spent $4 million just in western Ottertail County for absolutely no reason whatsoever.”
Ritchison said the $100,000 the group spent for the NDAWN station will make a great return on investment just for that one week.
“They got themselves a 40-time return on their investment,” he said. “It’s a risk management tool using weather to predict the future, which is an economic gain.”
Ritchison also discussed using different averages for rainfall, temperature and more to predict conditions into the summer and beyond.
He said much of Kittson County was between 40 and 50 percent of normal precipitation last year, and he predicted that won’t change for this year.
“Northwest Minnesota has been struggling with rain for the last five years,” he said.
He added the average annual rainfall for northwest Minnesota is about 19 inches. The gauges at Kennedy and Humboldt both recorded 5 inches below normal for 2021. And, according to long-term averages, Ritchison said Kittson County and the whole of northwest Minnesota is likely going to continue seeing dry years through Jan. 1, 2031. However, he emphasized, “Weather is a nonlinear, chaotic system. … X does not equal Y in weather. No one thing causes another.”
He gave the example of the media often saying that a La Niña will cause a cold, snowy winter. That is inaccurate as there was a La Niña system brewing last winter and the Upper Midwest saw very little snowfall and warmer-than-normal temperatures.
“They are an ingredient,” he said of the weather systems.
Despite the fact Kittson County had a very dry summer in 2021, the rain that fell throughout the fall will contribute to a wet spring, Ritchison said.
“We could get a couple of good snowstorms in February or March, maybe into April, then we’re talking minor or moderate flooding potential,” Ritchison said. “But I think we’re going to transition to drier-than-average this year.” 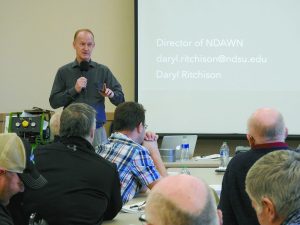