By Anna Jauhola
This winter has been a tad brutal and those on snow removal duty in the county have felt it the most.
The official weather station at the Lake Bronson Dam has recorded more than 43 inches of snow since Dec. 5. Reports from Hallock have shown 60 inches. And those totals are reflected across the county in ridges plowed up along rural roads, at intersections and in the constant drifting as weather systems move through.
Kittson County snow plow and motor grader operators, and their machines, have been put through the mill constantly for the last three months. County Engineer Andrea Weleski updated the commissioners on the situation during the board meeting on Tuesday, March 1.
“Right now, we’re on two and a half days on motor grader routes to clear out,” she said. “Usually it’s two days, but with the amount of snow on the banks we have right now, they have to put their V plows on, and that makes it two and a half days. And they do a circle — they do clockwise first and then counterclockwise so no one’s always last.”
One of the ugliest parts of these routes this winter has been the wind. When the plows and graders are out trying to clear roads and the wind blows behind them, the routes get filled in again. The trucks are on the paved roads eight hours right now, Weleski said.
“This age of instant gratification doesn’t work with snow and plowing. People just have to be patient,” she said. “This was the worst January on record.”
Especially during a winter like this, the plows and graders take a lot of abuse not just pushing snow off the roads but literally ramming into packed snow drifts. With all the abuse these machines take, Weleski is working to enter the highway department into a fleet system or leasing system with one company to maintain updated equipment.
Currently, the county purchases motor graders on a seven-year rotating basis and has both CAT and John Deere graders. Earlier this winter, the motor grader at Lancaster was out for a month due to repairs and waiting for parts to arrive. Last week, the transmission in the Lake Bronson motor grader unit went out. It’s $35,000 to replace the part, Weleski said. Assistant County Engineer Keith Klegstad added it’s also the next machine in the motor grader fleet that’s to be replaced. On top of that, the oldest plow truck is also down for repairs and is scheduled to be replaced with the truck the department ordered earlier this year.
“I talked to Shawn (Anderson, maintenance foreman) about this winter, and the abuse the machines are taking. He said the last time we had a winter like this, fortunately we didn’t have a lot of breakdowns,” Klegstad said. “But, it is the following season when you start seeing those issues.”
At the Feb. 15 commission meeting, Weleski got permission to visit with CAT about this option. A CAT representative is visiting on Tuesday, March 22. Under a leasing system, the grader transmission issue would have been covered, for example.
“We beat our machines to heck,” Weleski said. “They’re not meant to be running like this, especially in winter. Shawn said, on our trucks, they’ve put over 25,000 miles just this winter. Our (grader) machines have put on over 300 hours each. That’s pushing them for seven years, it ends up very intense.”
“And that’s not driving them, that’s ramming through snow,” said Commissioner Darrel Johnson.
As this winter continues, and the possibility of one more storm looms in the distance, the highway department has one plea for the public — to be patient. 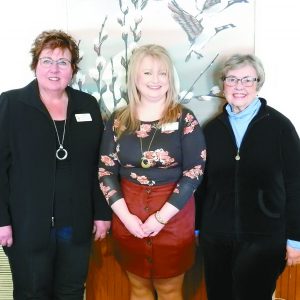