By Anna Jauhola
Flooding caused considerable damage at Hallock’s spillway this spring, due to the changes at the dam.
The Hallock City Council discussed the issue during its Monday, June 6 meeting.
In recent weeks, the city had Weleske Improvements put in place a clay and earthen levee across the front end of the concrete emergency spillway to stop the flow. Mayor Dave Treumer said Houston Engineering has been to the site and is in communication with the city, but will return to further inspect the damage.
Hallock received a $2 million grant through the Lessard-Sams Outdoor Heritage Council in 2019 to redo the dam. Houston Engineering of Thief River Falls bid and designed the project, which was executed in 2021 through the subcontractor, Spruce Valley Corporation, Middle River.
As the water ran through the spillway this spring, Treumer said it cut its own channel, which eroded earth on the north end of the spillway and cut under the concrete, which caused a lot of damage.
Utilities Superintendent Dan Larson said he’d like to at least fill the hole in along the edge of the concrete. It’s currently blocked off with cones.
“If somebody did go through those cones, you’re looking at a three to four-foot drop,” Larson said.
“(Jeff Langan) said we could do that and keep track of it,” Treumer said. Langan is the project engineer for Houston Engineering. “They’re still working on the FEMA end of it. We can do it for safety.”
Councilor Mike Totleben asked if Houston Engineering will be paying for the damages and repair.
“You were here when they said they guaranteed their work. He said that right here at a city council meeting,” Treumer said.
City Clerk/Administrator Aimee Sugden said she has been tracking expenses related to the issue and has already met with a FEMA representative. It’s possible the damage estimate for the dam will help trigger a disaster declaration and the damage will be paid for through federal funding.
“That’s an event we’re going to have every year, so it’s going to have to be re-engineered anyway and fixed,” Treumer said. “I’ve already said what I’ve said about getting FEMA to pay for something that wasn’t an extraordinary event, but it does qualify, I guess.”
Sugden also submitted other issues related to spring flooding that she hopes FEMA will cover, such as a crack in the levee at Fourth Street, and some graves at Greenwood Cemetery that are about ready to fall into the river. She said these issues were exacerbated by the spring flood. 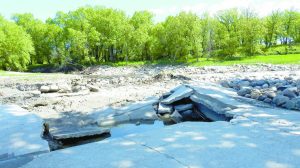 DAMAGE AT THE HALLOCK DAM SPILLWAY is extensive. The heavy flows caused by flooding undercut the concrete structure that’s been in place since the 1970s, leaving a huge hole behind, shown above and below.