By Anna Jauhola
Customer service, affordable pricing and the environment with a dash of creative license are the foundations of one of Hallock’s newest businesses. During the coronavirus pandemic, Tori Younggren saw her limited window of opportunity and seized it. And Sew Tori was born.
“COVID was bad for a lot of people’s businesses,” she said. “In a way, it was the reason mine kind of catapulted. I was doing wedding and bridesmaids dresses on my kitchen table. Then I had Dellamae in January 2020 and then we all got locked down.”
When 2021 came along and things started to open up again, Younggren realized she didn’t want to wrestle two toddlers, housework and animals around her seamstress work. Within two weeks of that realization, she secured her employment identification number, business bank account and rented space for Sew Tori inside Zedge Beauty Lounge in Hallock. She also came up with the business name — using a play on words to base it off her friends’ old saying regarding her unique style, “That’s so Tori!”
“Coming out of 2020, all these weddings were delayed and they were trying to get their weddings in. Bridal shops were swamped or wouldn’t do fittings because of COVID-y stuff,” Younggren said. “I just saw this little window of opportunity and I thought, ‘This is it!’”
Then the custom orders started rolling in and word started to spread that Hallock recently acquired a seamstress. Younggren said she put an ad in the Enterprise and even tried advertising on the internet through Facebook. All of it paid off.
“People started coming up from Grand Forks, Thief River and Roseau,” she said. “So I’m bringing people into our town, too, and that was super cool.”
During prom 2022 alone, Younggren altered more than 80 dresses. She loves being a part of these special occasions, from proms to weddings to just everyday clothing. She soon realized she’d made the right move, but she’d need more space.
“I needed a bigger space for my sewing business, so I asked Rocky (Bakken) one day,” Younggren said. “He looked out his window (at Bakken Boots) and said, ‘I never see anyone in that building over there. You should call the number on the side of it.’”
The building at 101 S. Atlantic Ave. was available, directly west of the Hallock Cenex station. And it ended up being the perfect fit. After presenting her business proposal to a few people, Younggren applied for a loan through Northwest Community Action and officially became a business property owner. She began sewing at the location on April 1, 2022, and has since painted the building a dark blue and made it her own.
“I don’t think I’m going anywhere. I’m pretty booked!” she said.
A History of Togas
Younggren has been fascinated with making clothes and creating beautiful things since she was very young. As a petite girl, she said clothing in her age range never fit her.
“I remember being 9 years old and everything that would fit me was like Minnie Mouse,” she said. “It was appropriate for my age. My mom was a seamstress, so we’d go to JoAnn Fabrics and she’d make me a swimsuit or a figure skating dress or a sundress. It was so fun.”
Even at a young age, Younggren sketched her ideas and gave them to her mother to help create. Later, she began making her own doll clothes, but that’s where it stopped for a while. She entered college and didn’t know what to major in, so she enrolled in education.
“I was in my first semester, and I hated it,” she said. “Teaching was not for me.”
After visiting with her adviser, she discovered the major of Apparel, Design and Merchandising.

“So my classes were The History of Togas; Pattern Making; Beginning, Intermediate and Advanced Sewing; Draping. All kinds of stuff that was hands-on and I’m like, ‘That’s my major!’” she said.
Younggren had finally rediscovered her passion for fashion in a way that would allow her to enter into a great career. Although she never envisioned becoming a millionaire by entering the New York or Los Angeles fashion scene, she thought she’d design athletic wear or hoped to one day own a seamstress business. Everywhere she moved, her sewing machine took a place in her front seat and she did alterations and other seamstress work at her kitchen table.
With her bachelor’s degree in hand, Younggren ventured out and held jobs like a paralegal and property manager until she could chase that dream. After moving to Kittson County with her husband, Nathan, she started coaching and continued to do seamstress work from home.
“Between Nathan believing in me and saying, ‘You can do it,’ and the community being so supportive, and it being affordable to start your own business, it’s been great,” Younggren said. “I want to provide a service to the community so I try to keep my pricing affordable.”
Providing a service
For weddings and proms, customers will often bring in dresses and other garments to be altered — either let out or brought in — to ensure the perfect look on their special day. But day-to-day garments also find a second purpose in Younggren’s shop. Recently, she altered a shirt for a woman who didn’t like the neckline. A customer requested an outfit for her therapy dog. Using a dog Halloween costume as a guide, Younggren measured the dog and created her own pattern, complete with swinging arms.
Making her own pattern starts with measurements, pictures and a rough sketch or tracing a garment onto paper. From there, she can contour the pattern as needed, tweak it and pin it, drape it on a mannequin, and change it as she goes.
“It’s like an art because I can look at a pattern and see what the garment will look like,” she said. “It’s just something I can do, like someone who can look at a sunset and paint it.”
Another customer wanted new covers for outdoor patio furniture. Younggren worked with the customer to find weather-proof fabric online and made a pattern to fit the cushions the customer had.
A grandmother visited Younggren in need of a dress for her grandchild’s wedding. She brought four pictures of four different dresses. She liked the sleeves on one, layers on another and the length of a third. Using her super-talent, Younggren envisioned how those would go together, worked with her customer to find the right materials, got her measurements and created a pattern from scratch.
“She absolutely loved it, and it fit her so perfect,” Younggren said. “That was a fun project. And it was probably more affordable than what she would have gotten at a bridal store. Being able to make a custom dress, and make it something people can afford, is so cool.”
She’s also used baby clothes to create a special quilt, memory bears from customers’ loved ones’ clothing and a first communion dress for a 10-year-old from her mother’s wedding dress. These sentimental and heart-felt projects really fit into Younggren’s passion to not only create new things from old material, but to also help reduce waste and do her part to save the planet.
One of her favorite stories from recent months came in the form of a stranger. A man walked in off the street and asked for a needle and thread. Sounds like a bad joke, but turns out the man was in real need. He’d split his jeans in a bad spot on the front.
“He said, ‘I’ve never sewn before.’ I said, ‘I can help you. What do you need done?’” Younggren said. “He needed jeans repaired but he was wearing them.”
She had the man step into the dressing room, hand her his jeans, she patched and stitched them up, and handed them back. It took her all of 10 minutes, leaving the man flabbergasted. The truck driver asked how much he owed and Younggren said, “Just let people know there’s a seamstress in Hallock!” And he said, “You seriously saved my day.”
When people leave Sew Tori satisfied and with a smile, that is Younggren’s dream wrapped up in a bow. 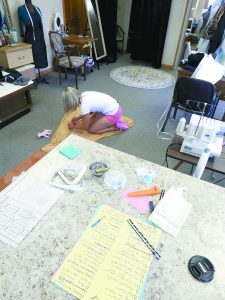 Younggren works on altering a bridesmaid dress for a woman from Grand Forks who found Sew Tori online. She added a slit and sewed in modesty cups in about 45 minutes. Shown also is Younggren’s long list of projects in the works. 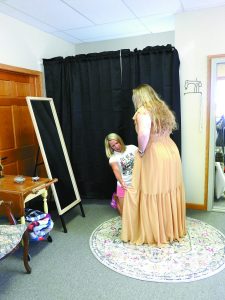 MANDY SCHELL, of Grand Forks, tries on her altered bridesmaid dress Friday, July 15 as Younggren makes a final check of her work.