By Asst. Coach Mark Bernstrom
The Bearcats started their 2022 football season with a road trip down to Moorhead to take on Park Christian.
This year’s group is led by seven seniors that have been playing since sixth grade. They have stayed with it through some rough years and were a big part of last years run. They are looking at taking their experience this year to make another impactful run like last year. First step in this process was to take care of business and come home with a win, and that they did.
In the first quarter, KCC got on the board with their first drive of the game. Junior Morgan Muir ran up the gut for a 17-yard touchdown to the scoring started for the night. The extra point kick by senior Isaac Folland was good, and KCC took a 7-0 lead early in the first.
After a defensive stand and a punt by PC the Bearcats started their next drive. Senior Chisum Schmiedeberg broke free for a 77-yard touchdown run to extend the lead. Extra point kick by Folland was good, and after quarter one KCC was up 14-0 over PC.
KCC really started to add to their lead in the second quarter.
Schmiedeberg added 3 more touchdowns in the quarter. He ran it in twice from 16 yards and 2 yards, and added in a 50-yard punt return. A successful 2-point conversion by Senior Braden Faken was had in the mix to give the Bearcats 34-0 halftime lead.
The third quarter started with PC taking the ball down the field with the help of a few Bearcat penalties, and scored on a 10-yard pass. The extra point attempt failed, but cut the lead to 34-6. KCC responded right away with a 45-yard touchdown run by Schmiedeberg and a successful point after kick by Folland to extend the lead to 41-6. Later in the third quarter, Faken ran the ball in from 6 yards out on a quarterback keeper. The point after was good by Folland, and after three quarters of play the Bearcats had a 48-6 lead.
In the fourth quarter the starters were subbed out and the rest of the players on the sideline were getting subbed in to get some game time experience. All players got a chance to play this night. The last score of the night came from freshman Brock Scalese as he threw a 23-yard touchdown pass to sophomore Landon Pankratz. A successful 2-point conversion by Brock Scalese made the final score 56-6.
Even though the offense was rolling all night, the defense also showing up all night. The defense held Park Christian to 121 total offensive yards and made them punt six times in the night. The defense also recorded two interceptions, one by senior Andrew Knutson, and one by Faken.
KCC had a total of 16 players show up on the stat line when it came to defense.
The next game for KCC is this next Friday at 3:30 in Lancaster against the Stephen/Argyle Storm.
The Bearcats are looking to keep the rhythm they had for week one continuing into week two. GO BEARCATS!!
Box Score
KCC 14 20 14 8 56
PC 0 0 6 0 6 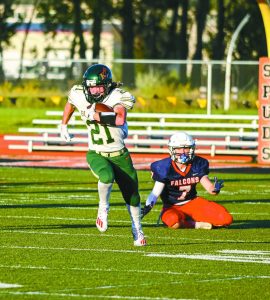 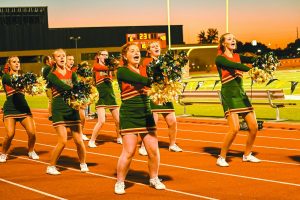 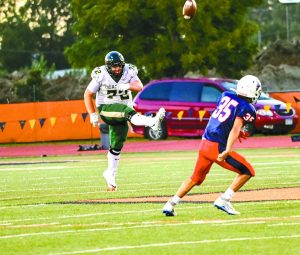