By Asst. Coach Mark Bernstrom
In the first home game of the year, the Bearcats took on the Stephen-Argyle Central Storm in an afternoon battle on Friday, Sept. 9 in Lancaster. These are always hard-fought games between these two rival programs, and this day was no different.
The game started with a defensive stand by KCC and made SAC punt on their first possession. KCC went on offense and marched down the field until the ball was fumbled and the Strom took over. They went down the field and scored on a 4-yard touchdown run, and with a successful 2-point conversion took an 8-0 lead.
In the second quarter, KCC settled in and got things going. Chisum Schmiedeberg got the Bearcats on the board with 3-yard touchdown pass from Braden Faken, and with a successful 2-point conversion by Faken tied the game 8-8. The next offensive possession KCC scored again with a 11-yard touchdown run by Morgan Muir. The point after kick by Isaac Folland was good and KCC took a 15-8 lead.
KCC added to their score again on the next possession with another strong run by Muir. Muir broke free with a 24-yard touchdown run, and with another successful extra-point kick by Folland extended the lead 22-8 late in the second quarter. The Storm started to put together a drive at the end of the half, but the Bearcats defense held strong within the 10-yard line to keep them out before the half.
The Bearcats started the second half just as they finished the first half, with another scoring drive. They methodically marched down the field and finished it with a 1-yard run by Faken. The point after kick by Folland was good to extend the lead 29-8. The scoring was capped off with a 90-yard touchdown run by Schmiedeberg after the defense caused a turnover deep in their own territory. The extra point was good by Folland for a final score 36-8.
The offense had another nice day moving the ball, and overcame 2 turnovers on the day to keep themselves on track to finish drives. The defense was the big story of the day. The Storm was able to move the ball at times down the field, but the defense held them out of the end zone three times when they got within the 15-yard line. Those are critical stops in a hard fought and hard-hitting game.
The Bearcats next game is home in Lancaster at 3:30 p.m. against Northern Freeze. This is our homecoming game, so come on out and enjoy the festivities. 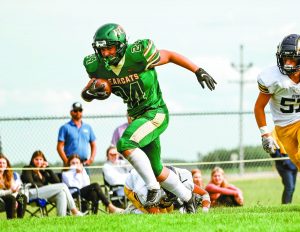 LEADING THE KCC BEARCATS in defensive tackles was MOrgan Muir with 11.5. Muir also had 9 carries for 91 yards and 2 touchdowns to help his team defeat the Storm Friday, Sept. 9 in Lancaster.
(Photo Courtesy of Jazylnn Folland)