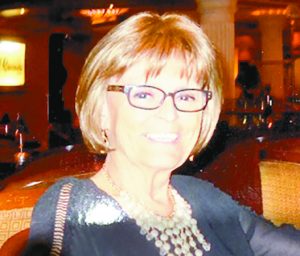 Peggy Lee Porter, 72, of Halma, Minn., lost her fight to cancer on Monday, Sept. 12, 2022, surrounded by her loving family as she lifted her hand to the Lord.
Peggy, the second child of Glendon and Lela (Pederson) Spilde, was born on Nov. 18, 1949, in Hallock Minn. Peggy grew up in Halma, Minn., and was a lifelong member of Eidsvold Lutheran Church where she was baptized and confirmed. Peggy attended her first six years at the Halma Franklin School and was a part of the last graduating class from the Halma School. She then attended and graduated from Karlstad High School in 1967.
Following graduation Peggy moved to Minneapolis and worked for International Homes as a secretary until 1971. In 1971, Peggy caught the “Traveling Bug.” She and two of her friends had the opportunity to travel to Europe. While in Europe for four months, they were able to visit 11 countries.
In 1977, Peggy was hired to manage the American Legion Club in Lake Bronson, Minn., and continued working there until 1985. During these years she met and fell in love with a guitar playing, country western singer Gary Porter. On Feb. 22, 1978, Peggy and Gary were married in Daytona, Fla., and spent their honeymoon at the Daytona 500. Sadly, Peggy became a young widow 11 short years later when she lost Gary to cancer.
On Nov. 23, 1992, Peggy began her 22-year career at Motor Coach Industries in Pembina, N.D. It was there where she met her lifelong special friend Gene Votava. Peggy and Gene enjoyed over 20 years together golfing, traveling, fishing and hunting. Peggy lost the second love of her life on July 18, 2012.
A large part of Peggy’s life was spent enjoying her family, nieces and nephews and the latter years her great nieces and nephews. She loved golf, softball, bowling, fishing, hunting, travel, taking vacations and working in her yard.
Peggy was diagnosed with breast cancer in 2007 and fought this for two years until she was told she was cancer free. Peggy’s cancer made another appearance in 2013 and this time she was in the fight of her life. As devastating as this news was for Peggy, she never gave up, she put her faith in God, and was determined to not let cancer win this battle. For nine, years this courageous woman took on this beast showing no fear. She did not let cancer define her life or her ability to enjoy life with her family and friends. Through her hardships she taught many about strength and faith, and what it truly meant to live life for today and how precious time can be. We are comforted knowing that she is in the arms of the Lord and there is no more pain.
Peggy is going to be greatly missed by the ones she leaves behind. Sisters, Julie Spilde, Halma, Marcia Spilde Heath, Fargo, N.D.; brothers, Glen (Mary) Spilde Jr., Karlstad, Minn., Dean Spilde, Glyndon, Minn., Peder (Heidi) Spilde, Halma; her aunts, Gerda Hams, Karlstad, and Kathy Pederson, Halma; along with several nieces, nephews, great-nieces and nephews, cousins, friends, her special Motor Coach friends, and stepchildren.
Peggy was preceded in death by her parents, Glen and Lela Spilde; husband, Gary Porter; Special Friend, Gene Votava; and brother-in-law, Lorne Spilde.
Peggy’s celebration of life will be on Sunday, Oct. 2 at 2 p.m. at First Lutheran Church in Karlstad. Visitation will be one hour prior to the service. Pastor Caitlin Jensen presiding. Interment will be at the Eidsvold Cemetery in Halma.
Austin Funeral Chapel, Hallock, is in charge of the arrangements. www. austin funeralchapel.com.